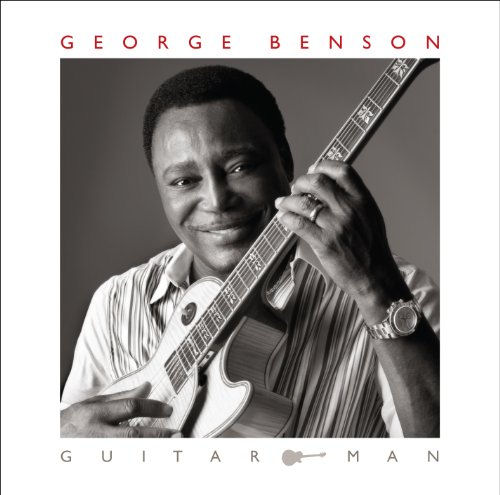 In a career that spans five decades, more than 30 recordings as a leader and ten Grammy Awards, the legendary George Benson has used his jazz roots as the foundation for an engaging mix of pop, R&B and other shades that add up to a style that appeals to a broad mainstream audience. Along the way, he has also established himself as a formidable jazz singer – one whose biggest career hits have showcased his vocals. But his new album Guitar Man is just what the title implies – a project that highlights Benson’s unparalleled guitar playing, perhaps more than any other album he has released in decades.

The 12-song collection includes a mix of jazz and pop standards – some in a combo setting and some solo, but all of them tied together seamlessly by Benson’s soulful and exploratory signature sound. Lending a hand on this recording is a solid team of veterans and newcomers alike – pianist Joe Sample, keyboardist and musical director David Garfield, bassist Ben Williams and drummer Harvey Mason. Williams is one of the hottest up-and-coming new artists on the jazz scene. Mason is a regular member of Fourplay, and a studio collaborator with Benson all the way back to Benson’s 1976 blockbuster album, Breezin’.

On Guitar Man, Benson’s mastery of the guitar is demonstrated in a variety of styles and settings, all with legendary jazz roots. The opening track “Tenderly” is a solo guitar track that serves as a reminder that Benson is one guitar man with sufficient technical and interpretive skills to be a band unto himself. The second song is an intriguing rendition of Lennon and McCartney’s “I Want To Hold Your Hand.” Along with Benson on nylon-string guitar and Garfield on piano are guitarists Paul Jackson Jr. and Ray Fuller; bassist Freddie Washington; drummer Oscar Seaton, Jr. (who regularly tours with Benson); violinist Charlie Bisharat; and flutist/clarinettist Dan Higgins. All come together to create a fully orchestrated sound that casts one of the most simplistic of the Beatles’ early love ballads into something full-bodied and engaging.

The remainder of the set consists of either solo guitar tracks or Benson backed by the aforementioned five-man team, which lays down an easygoing rendition of Stevie Wonder’s “My Cherie Amour.” Benson delivers the lyrics in his own engaging vocal style that includes a healthy dose of his trademark scatting guitar accompaniment.

Other highlights include a rollicking version of the Champs’ 1958 instrumental hit, “Tequila,” followed a couple tracks later by “My One and Only Love,” which opens with a 16-bar solo jazz guitar intro that segues into a sweet vocal ballad. Benson delivers a playful straightahead rendition of “Paper Moon” with the quartet, followed by a solo guitar rendition of “Danny Boy” (one of the few times, if ever, that a guitar sounds like bagpipes). In the final stretch, Benson and Garfield set up a lush guitar-and-piano arrangement of the smoky standard, “Since I Fell For You,” with Benson once again stepping up to the mic for an emotional delivery of the song’s impassioned lyrics.

Benson has never been one to shy away from innovation or experimentation. For this guitar man, putting a jazz spin on pop standards – not just on this recording but throughout his career – is less of a taboo when you’re willing to dispense with labels and the limitations that come with them.

“People categorize things because they need to find someplace to put them on their shelf,” he says. “It’s all music to me. I think a lot of pop tunes that were very big in the United States many years ago were recorded by jazz musicians playing in the background. Most of the Motown records were recorded that way. Those guys were jazz musicians who were living in Detroit and were called to do a job, and they did it very well…I try to do the same thing. I try to make it sound like it’s natural, because to me it is. There are only two kinds of music, good and bad. There are a lot of things in between, but they’re eventually going to fall on one side or the other of that equation.”