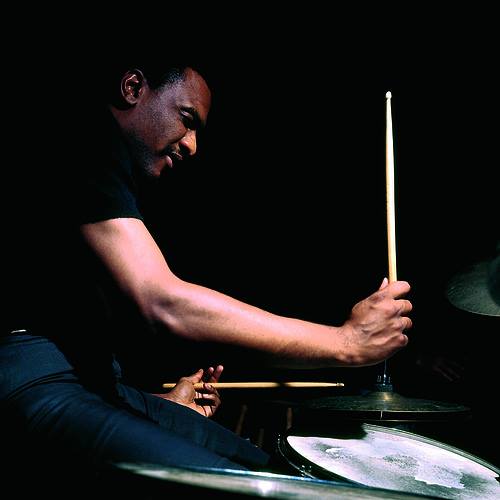 “Retire? You don’t retire from jazz . Some cats have died on the bandstand,” said drummer and educator Joe Chambers, during a phone interview from his home in Wilmington, North Carolina. “By the same token. I don’t have the desire to play the drums behind anybody that’s living today, with the possible exception of McCoy Tyner. All the cats I would want to play behind are all dead. I am tired of playing drums. I am writing more than anything else. I have always been a composer. In fact, there have been very few drummers in the history of jazz who were composers, except maybe my mentor Max Roach.”

Chambers, who was the first Thomas S. Kenan Distinguished Professor of Jazz in the Department of Music at The University of North Carolina at Wilmington, for three years, (2008-11), has worked with most of the jazz greats, including Miles Davis, Freddie Hubbard, Wayne Shorter, Dizzy Gillespie and Max Roach and Max’s all-percussion group called M’Boom. As a sideman, a drummer, percussionist, vibes player, and as a leader, he has recorded more than 500 albums and CDs. His compositions have been performed at Carnegie Hall and Lincoln Center. Joe also contributed to soundtracks for several of Spike Lee films including “Mo Better Blues.” His most recent release “Joe Chambers Moving Pictures Orchestra Live at Dizzy’s Club Coca-Cola in New York City,” (Savant, 2012) was nominated for two Grammys.

“I just got back from a week residency in Los Angeles, at The University of Southern California that went very well.” Chambers said. “I have been doing quite a bit of those lately. I enjoy teaching. I also recently did a residency at Rutgers and will be at North Carolina Central University (NCCU) from November 20-22. I am looking forward to it because it’s a mostly African-American university and I feel that black schools, as the writer Stanley Crouch said, should bring jazz musicians to their campuses. I was in Atlanta last year for the Jazz Education Network (JEN) conference and I was approached by Dr. Ira Wiggins, (the director of the NCCU jazz studies department), who asked me was I available. I am looking forward to interacting with the students and telling them more about how jazz, to me, is social history.”

Joe Chambers, born in 1942, is a native of Stone Acre, Virginia, who was raised in suburban Philadelphia. He grew up in a musical family, and was performing in rhythm and blues bands, earning money, when he was a teenager. Later, he attended the Philadelphia Conservatory for one year. By the late 1950s and 1960s, he was a much-in-demand drummer in the jazz scene, and was based in New York City.

“Jazz was visible then,” Chambers said. “It’s not visible now. During those days, jazz music was played in the neighborhood clubs on the juke boxes. Most of the tables and booths in the clubs had little juke box selectors. And most of the music on them was jazz. I remember when Ahmad Jamal’s ‘Poinciana’ was a hit. And so was Lee Morgan’s ‘Sidewinder.’ People would play those tunes over and over in the neighborhood clubs, when there wasn’t live music. Jazz was also on TV, with shows Steve Allen, Peter Gunn. But, once the juke box industry faded out, then so did jazz.”

“I am writing as we speak,” he said. “I am working on the next album. I call it ‘M’Boom with Strings.”. It’s a big project. It’s a way to get my music out there as an orchestra. I don’t know if it will be nominated for a Grammy like ‘Moving Pictures’, but we will see.”