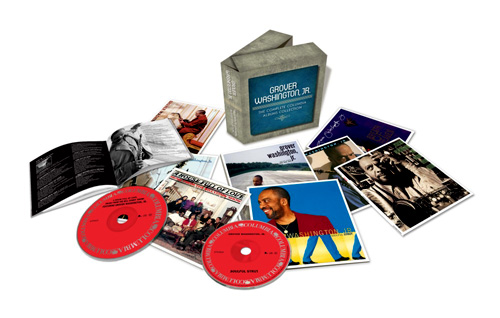 Grover Washington JR…. Fused and Smooth…
-Karl Stober JJA
During the numerous theoretical waves of music and its major influences, the annals of music’s scrolls have recorded many activists of the art of sound which have risen to become the statesperson of their chosen pulpit. Rock and roll had the Beatles, Nirvana, and Elvis taking front stage; the classics waltzed in Brahms, Beethoven, and Chopin; however jazz has eclipsed some of the most divinely unique and innovative conductors to have ever dueled with a music sheet. That said Legacy Recordings, the catalog division of Sony Music Entertainment, is affording serious listeners an encouraging collection of push-n-plays for the holiday season. This year they are announcing a diverse mixture of celebrated artists from a vast array of genres under the marketing umbrella called… The Complete Columbia Albums Collections! One such artist with an ability to shift the tectonic plates of any level of listenership with his horn’s, is the purist of smooth spins forever known as saxophonist Grover Washington Jr.; the man whose diverse appeal to this day still embraces generations.

If I may be so rationally direct, music collections during the holiday season or for that matter…anytime… are as engaging to me as a root canal with an ice cube chaser however this Legacy effort has its virtues and stands alone with a “heavy in quality format” presentation, from a number of yesteryears efforts by other labels. Never has a statement been more confirmed than in the Columbia collection of Grover Washington JR’s classic horn appeal collection.

From first spin; a rare yet polarizing album know as A Room Full Of Love/ Music from the Bill Cosby Show to the deliciously enchanting horn- heavy showcase known as Aria, one enters into a narcotic haze of nostalgic streams of fusion with a heavy smooth jazz addiction. This collection petitions a vast array of audiences, defines classic fusion and smooth perceptions, and defies mediocrity amidst the holiday clutter. Grover Washington JR‘s collection concedes his earned immortality with strategic selections and precise resonance!

If there was one issue with the set it would be that more information (Historical) on Mr. Washington was available in the booklet insert, with that noted the musical (Album) information afforded the listener is outstanding.

Some critics believe that Mr. Washington’s music was simplistic by the textbook culture; I stand in disagreement, and I am not alone in this, for his sound never shapes itself in a softened fashion, for the hidden complexities of his textures in such smooth journeys as Strawberry Moon, Time Out Of Mind, Next Exit, and Soulful Strut are filled with restless and demanding arraignments that define the classic methodology of jazz. Take his song Overjoyed for as you analyze it… it romances the jazz purist’s mentality with and educated ease, at the same time injects knowledge of the Washington craft within the jazz newborn. This was Mr. Washington’s mystique and most important what this new collection unmasks.

The straight ahead veins of Mr. Washington are also brought front stage in this dynamic project with spins, Then and Now and All My Tomorrows. Showcased in these offerings are bassist Ron Carter, pianists Herbie Hancock, Hank Jones and Tommy Flanagan, trumpeter Eddie Henderson and singer Freddy Cole, all whom have notable pasts and intricate design in their own fields. The intensity in Mr. Washington’s straight-ahead pieces is in his mastery over his instrument; manipulating the sound thus pushing the envelope of his potential and the others around him on stage.

This project , Grover Washington JR. “The Complete Columbia Albums Collection,” is much more than a holiday offering, it is an experience in the art of an iconic master whose mind took jazz , as a genre, away from a world of underdeveloped melodies and rhythms. Thus navigating young musicians on each of their individual voyages and allowing new compass headings to those already in motion…as his works became a template. A legacy shortened by illness but rejuvenated by the sound that is forever underestimated and talent that is still igniting sparks today through the efforts of others and Sony.