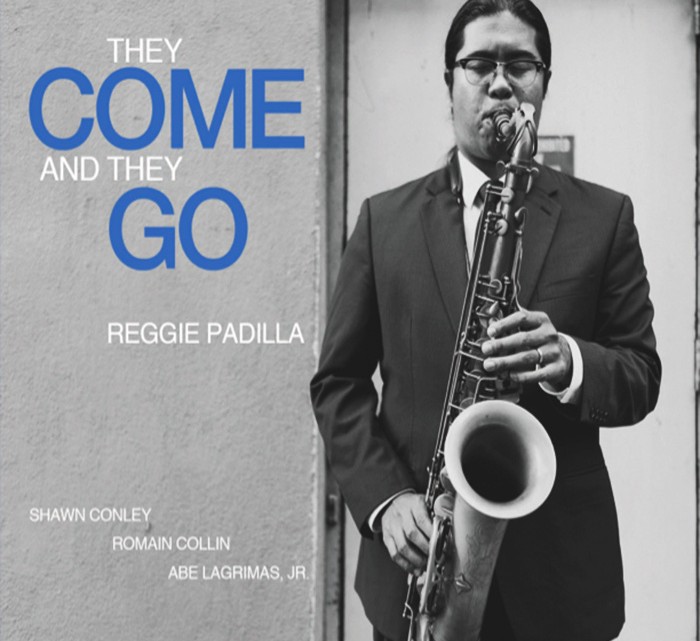 Pass Out Records is proud to announce the release of “They Come And They Go”, the second album by Hawaii-based saxophonist Reggie Padilla. Joining him on this recording is the rising jazz trio “The North” comprised of Hawaii-raised drummer Abe Lagrimas, Jr. and bassist Shawn Conley, along with pianist Romain Collin. All three musicians are alums from the prestigious Thelonious Monk Institute of Jazz. With a musical offering of nine (9) original compositions, Padilla and his cohorts explore and redefine the post-bop elements of rhythm, melody, and improvisation.

“’They Come and They Go’ refers to moments of inspiration. Often very present or sometimes, not present at all,” states Padilla. One summer, the oftentimes in-demand Padilla experienced a long period of writer’s block, which was broken after taking several international trips. The newfound experiences on these trips were the catalyst needed to get Padilla back on the creative edge of performance and composing. “The chemistry of the musicians and the ebb and flow between Padilla, Lagrimas, Conley, and Collin, is truly a world-class sonic masterpiece and raises the bar for jazz recordings in Hawaii,” adds Eric Lagrimas, President of Pass Out Records.

The compositions on “They Come and They Go” are emotional snapshots of events in Padilla’s life. With quirky topics ranging from a favorite restaurant menu item (“Number 6”) to poking fun at your new international friend (“Chicken And Peanuts For Kenny”) there’s a sense of “living” that can be heard in the music. Padilla digs deep with the dynamic and passionate “Count On Me” inspired by a family argument and yet, still evoke familial bliss, as he reflects on his own little family in “Lullaby For Three or More.”

One can say that Padilla, who is also an avid surfer, is experience a wave of musical opportunities and successes. In early 2014, Padilla made his second appearance at the internationally acclaimed NAMM music products trade show as an artist endorser for P. Mauriat saxophones, Theo Wanne mouthpieces, and Vibrato polycarbonate saxophones, and his debut appearance at the Philippine International Jazz Festival as a leader. Padilla recently combined his two favorite activities: music and surfing. He launched a series of Youtube videos of himself surfing while playing the saxophone! Known as “Surfing Sax,” Padilla caught the attention of GoPro Cameras where he is currently working with them on content development.

Padilla is living in the “now” and hopes that listeners will be able to connect with his inspiration as “They Come And They Go.”