It Was A Night of World Music – Toronto Jazz 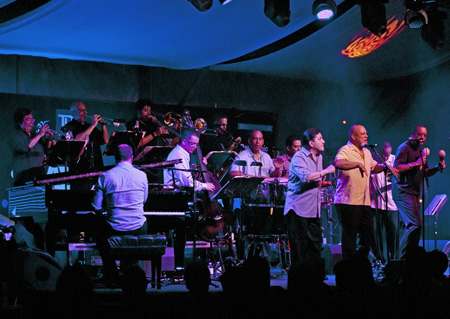 If you had to pick a theme for Sunday evening it would have to be world music in the general sense of the word. Each act was very different in style and substance from the other.

The main icon of jazz history undoubtedly had to be Randy Weston who at 85 continues to perform and educate all generations about the origins of music and the history of jazz. The Glenn Gould Studio was a fitting venue for an intimate solo performance. Weston had made it his mission to explain the history of jazz decades earlier with the late Ray Bryant.

In order to emphasize his African heritage with the theme of movement to other lands, Weston selected Ellington’s “Caravan.” This jazz standard was composed by trombonist Juan Tizol who was born in Puerto Rico and, as Weston explained, established the link to the Caribbean and ultimately to Africa. He Ellington theme continued with “Chromatic Love Affair” and “Perdido.” Each selection was to have it’s unique interpretation around the melody. Moving through the historical journey, Weston continued by showcasing Fats Waller and Thelonious Monk.

Weston talked about how African music is as old as Africa and how music itself stems from the Creator. He also offered interesting tidbits of information. Thomas “Blind Tom” Wiggins (1849-1908) was a visually impaired pianist who could play anything that he heard. Also, the African definition of harmony emphasized the connection of souls with the universe.

The legendary pianist also played some of his own compositions such as “Berkshire Blues” and a beautiful rendition of the lyrical “Little Niles.” The performance ended on a distinctive contemplative tone with attendees leaving inspired and relaxed after such a unique opportunity.

Moving on to the Mainstage Concert, the opening act of Dubmatix kicked things off with a good dose of predominantly reggae and dub. The stage then gave way to the 13-piece collective and two-time Grammy award winning Spanish Harlem Orchestra. Quiet a few local Latin jazz musicians were in the house to enjoy the show. The group played a few selections from their recent cd with such tunes as the cha-cha laced “Como Baila Mi Mulata” and “La Salsa Dura.” The latter is a perfect example of how this band combines strong horn lines for its 2 trumpets, 2 trombones, and 1 bari sax/flute together with the 3 vocalists. For this performance, vocalist Herman Olivera took the spot of Ray De La Paz who could not make this gig. Olivera, the lead singer of the Eddie Palmieri Orchestra, fit right in. He was featured in the classic Celia Cruz’s “Ahora Si.” In the middle of the set, to give the vocalists a bit of a rest, the orchestra played “Rumba Urbana” which is an original composition and featured a piano solo by band leader Oscar Hernandez. Mitch Frohman, a sax and flute veteran of 25 years with the great Tito Puente, was very impressive in the horn section and as a soloist playing either baritone sax or flute. Some cool salsa moves were seen on the makeshift dance floor and everyone was on their feet for the climactic ending. Toronto veteran percussionist Luis Orbegoso, who has played and recorded with many artists including the Spanish Harlem Orchestra, came on stage to play in the final piece.
A full week of wonderful performances and discoveries is still ahead of us.