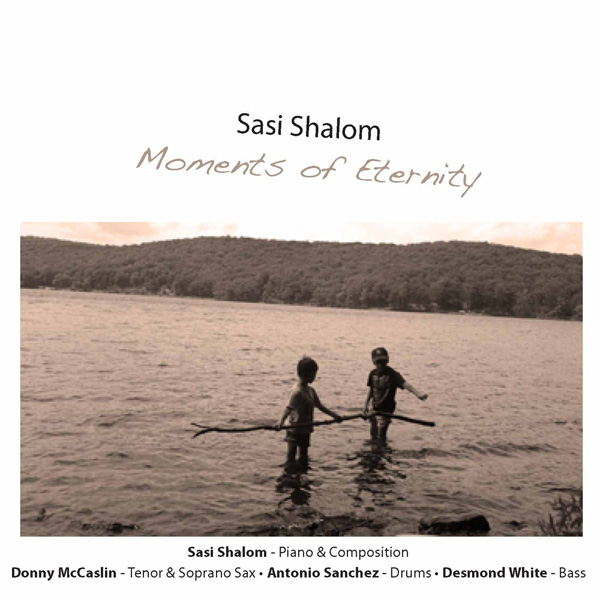 Album is Dedicated to the Children and Heroes of Sandy Hook Elementary, with Proceeds Going to the Sandy Hook Promise

The CD is dedicated to the children and heroes of Sandy Hook Elementary School, with proceeds going to the Sandy Hook Promise organization.

‘Moments of Eternity’, available now via Bandcamp, is filled with dreamy highlights – from the opener ‘Shari’, written for Shalom’s wife, to the title track, to ‘My Sons My Soul’, Shalom infuses his all-important family life into the fabric of the music. Originally from Israel, Shalom even manages to get a bit of Hebrew into one of his song titles, ‘Aba (My Father)’. Listen to audio samples, here:
https://soundcloud.com/sasi-shalom/sets/sasi-shalom-moe-sampler

Shalom, who cites pianists Keith Jarrett and Bill Evans and the band Weather Report as long-time inspirations, has toured the world as an independent jazz artist and band-leader, releasing multiple CDs along the way (including ”Long Time Coming” with Ravi Coltrane, Al Foster, Buster Williams and Torsten de Winkel). He has also built an impressive body of work in film and television, scoring projects for Martin Scorsese, CBS, HBO, FOX, Nickelodeon and more. Shalom is a graduate of the famed Berklee College of Music in Boston, and counts Sanchez and McCaslin among his former Berklee classmates. His bio follows:

More about Sasi Shalom:
Originally from Israel, Sasi Shalom is a prodigious composer, producer and performer. He has scored music for the Martin Scorsese award winning picture “Stop It”, music and sound design for Nickelodeon’s Dr. Seuss, composed for the award-winning musical comedy “From The Kitchen With Love” (Haifa Theater, Israel), and has scored many major commercials and music for networks including CBS, HBO and FOX.
Sasi has previously released four Jazz records as a leader (Modus, The Way I See It, Long Time Coming and Endless Nights), toured his groups to the US, Europe and Israel, and has worked with such artists as: Buster Williams, Al Foster, Jerry Bergonzi, Adam Nussbaum, Abe Laboriel Jr, Ralph McDonald, Ravi Coltrane and Will Downing. Sasi appreciates music from all over the world and has incorporated this diversity into his writing and improvisations. He is present in a music scene with some of the finest young pop, rock, folk and jazz talent in the greater New York and New Jersey area.

More information about The Sandy Hook Promise, or to make a donation:
http://www.sandyhookpromise.org/