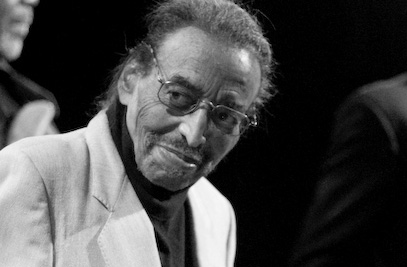 “I’m happy to say that I’m able to find people wherever I go that are not black, not white- they’re just human beings. I don’t dig staying in one groove. At this stage of my life, I’ve dedicated myself to playing what I want to play, how I want to play it, for the rest of my time. Regardless of whether one might like it or one might not like it. That’s where I am, where I’ve been and where I intend to stay.” Foreststorn ‘Chico’ Hamilton

Hamilton began leading his own ensembles in 1955 and recorded 60+ albums as a leader. Hamilton’s impact upon jazz included the introduction of two unique and distinct sounds: first in 1955 with his “Original Quintet” which combined the sounds of his drums, the bass of Carson Smith, the guitar of Jim Hall, the cello of Fred Katz, and the flute of Buddy Collette; and the second in 1962 with his own drums, the bass of Albert Stinson, the guitar of Gabor Szabo, the trombone of George Bohanon, and the tenor sax of Charles Lloyd.

Hamilton appeared in the 1941 film “You’ll Never Get Rich” staring Fred Astaire, and his ensemble was prominently featured in the 1957 film noir classic “Sweet Smell of Success” starring Tony Curtis & Burt Lancaster. Hamilton’s mallet driven performance of “Blue Sands” was a featured moment in the 1959 Newport Jazz Festival documentary “Jazz on a Summer’s Day”, and Hamilton composed the soundtrack for Roman Polanski’s English-language debut, the 1965 psychological thriller “Repulsion” starring Catherine Deneuve. Hamilton moved to New York City in 1965 and formed a commercial and film music production company, scoring the television film “Portrait of Willie Mays”, the popular children’s series “Gerald McBoing-Boing”, and working on Madison Avenue scoring hundreds of commercials for TV and radio.
In 1987 Hamilton helped to found the New School University Jazz & Contemporary Music Program in New York City, where his students included members of Blues Traveler and The Spin Doctors. Hamilton enjoyed a renaissance in his later years, beginning in 1989 when he established yet another unique and distinct sound in jazz debuting his Euphoria ensemble with which he toured extensively in the US, Canada, Europe and South America. Hamilton recorded frequently in recent years, including a string of 10 + recordings for the Joyous Shout! label with guest appearances from the likes of Love front-man Arthur Lee, vocalist and successful actor Bill Henderson, trombonist George Bohanon, bass trombonist Jimmy Cheatham, rhythm & blues vocalist Fontella Bass, guitarist Shuggie Otis, trumpeter Jon Faddis, percussionist Jaimoe of the Allman Brothers Band, and vocalist Jose James.
Hamilton’s ensembles were a breading ground for talent, with Paul Horn, Eric Dolphy, Ron Carter, Gabor Szabo, Charles Lloyd, Larry Coryell & Arthur Blythe and countless others having made their names with Hamilton, and a wide array of musicians credit Hamilton and his music as an influence, including Carlos Santana, Charlie Watts, Joe Claussell, Jose James, Mark de Clive-Lowe and Thievery Corporation.
Saluted by the Kennedy Center as a “Living Jazz Legend”, and appointed to the President’s Council on the Arts, this recipient of a NEA Jazz Master fellowship was considered one of the most important jazz artists and composers, creating vivid, positive, uplifting, engaging & relevant music until the end of his life. This past October Hamilton recorded newly composed material with his long-standing Euphoria ensemble, with Paul Ramsey on bass, Evan Schwam on flute, baritone, tenor, alto & soprano saxes, Jeremy Carlstedt on drums, Mayu Saeki on flute & Nick Demopolous on guitar, along with featured guest appearances from trombonist George Bohanon and fellow NEA Jazz Master trumpeter Jimmy Owens, for his “The Inquiring Mind” CD to be released on Joyous Shout! in early-2014.
A monthly concert series Euphoria Presents “Celebrating the Life & Music of Foreststorn ‘Chico’ Hamilton” continues on December 15th @ 7:15 PM @ DROM, 85 Avenue A (b/w 5th & 6th Streets) in the East Village, New York City, Tel 212.777.1157, www.dromNYC.com. Cover $12 advance, $15 day of show.