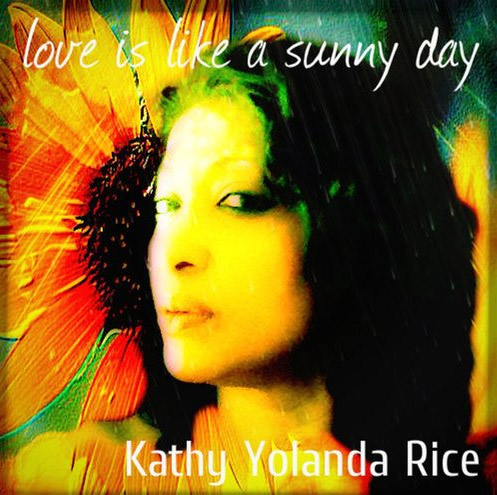 Kathy Yolanda Rice’s new single, “Love Is Like A Sunny Day”, released February 22nd on the Paintbrush Records label, is still climbing the charts. The song garnered spots on five CD Baby Charts after its release, and is still the top rated single in the Jazz/Cool Jazz category. It is also finding success overseas, moving up from the 12th to the 9th position on the May 6th UK Soul Chart. “Love Is Like A Sunny Day” was co-written with Gary Swann and produced by the musical heavyweight and Grammy nominated Kelvin Wooten, who has generated hits for Anthony Hamilton, Jill Scott, Erykah Badu, and Kelly Price.

While the single is Rice’s latest release in a while, she is far from a novice in the music industry, having composed and produced her 10 track debut album, “After All These Years” in 2004. Born and raised in the cosmopolitan city of Huntsville, Alabama, her talent was recognized early. She began studying piano at age 6, and followed up with formal voice training at age 12. Rice received her B.S. in Music Education from Alabama A&M University. After establishing her own label in 2004, she continued to compose and record. Rice embarked on several high profile projects and collaborations in 2012. In February, she joined a lineup of prestigious women musicians on the Bobby Pin Diaries movie soundtrack, featuring her up tempo tune, “I’ve Gotta Find a Love”. In August, Rice was the lyric soprano for the recording of the Walter Hawkins remake of “Jesus Christ Is the Way”, by Nuove Mystique, which was later released by Warner Music Group. She was also a featured artist on the Women in Jazz: South Florida Volume III compilation CD, which was released in December 2012.

Rice commented, “I’ve grown tremendously as an artist and person since the release of the album, “After All These Years”. I’ve become more open to working with other people in the creative process, and I’m now recording songs that were written exclusively by others. The collaborations have allowed me to grow in the business of music because there is a new level of accountability that didn’t exist before. I’m more in tune with the many hats that an independent artist has to wear in order to survive and thrive in the music business. I’m extremely pleased with “Love Is Like A Sunny Day”, and look forward to sharing many more new releases with fans soon.”

Phoenix based KJZZ on air personality and jazz musician Paul Anderson critiqued the single, stating, “Though Kathy Yolanda Rice’s new single, “Love Is Like A Sunny Day” isn’t a bright and sunny up tempo number as one might think based on the title (i.e., there’s no bubblegum to be found here), there’s certainly no disappointment on this reviewer’s part. The song is about the possibilities of love, and it’s a mellow and uplifting track that’s musically and lyrically solid with lyrics that speak to the best feelings of being in love. But being a jazz fan, I’m looking for some sax and vocals that remind me why I’m tuning in to begin with. Kathy Yolanda Rice brings that to the table and more. This song, which is both beautiful and reflective, will definitely command any listener’s full attention.”

He continued, “Many will play, but few will stay in my rotation list, and this cut is one that won’t be revolving out. It features an above average soprano sax, and finds its home in the smooth/cool jazz category. Expectations are set pretty high for these types of tracks, and Ms. Rice does an outstanding job of meeting them on vocals, hitting all the right notes at the right time, and the band behind her is tight. “Love Is Like A Sunny Day” is filled with harmonically rich chords that provide a cozy and inviting bed of sound that complements the most refreshing new “Soulful” Jazz vocalist I’ve heard in some time. She could easily produce R&B hits with her voice which is warm, and layers so well with her backgrounds. Originally, Smooth Jazz came out of Jazzy R&B, like Norman Connors, George Duke, Eloise Laws, and Ronnie Laws. Rice’s music connects me with that vibe, and remarkably, this is just one single from an upcoming project. I recommend that jazz enthusiasts find this tune. If the rest of her work is anywhere near this good, we just might be getting a peek at the next Jazz Chanteuse in Kathy Yolanda Rice. Great song!!”

‘Love Is Like a Sunny Day’ can be purchased at Amazon.com, iTunes, or CD Baby CD Baby.

Kathy Yolanda Rice’s next single, “Flesh Of My Flesh”, is expected to drop later this month, and will feature an R&B/gospel duet with the internationally renowned television, film, and Broadway star Philip Michael Thomas. While Thomas is most widely recognized for his roles as Ricardo Tubbs in Miami Vice and Stix in the movie Sparkle (Irene Cara), he is also a talented composer, multi-instrumentalist, and vocalist.