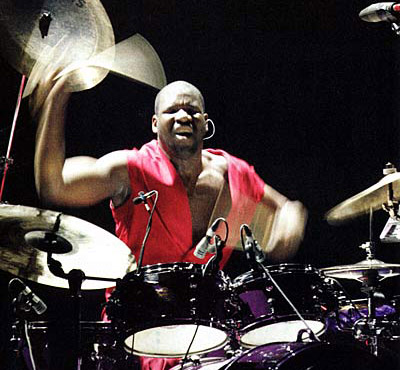 Boston, MA. March 12, 2013 – Premier funk, pop, and R&B drummer John Blackwell, best known for his work with Prince, Justin Timberlake, and Patti LaBelle, has been named associate professor of percussion at his alma matter, Berklee College of Music. He began teaching this semester.

Born and raised in Columbia, South Carolina, Blackwell started learning drums at age 3 from his father, John Blackwell Sr., a drummer who played with Mary Wells, King Curtis, the Drifters, the Spinners, and others. He played jazz clubs regularly as a teen, and at 17, he landed his first high profile show with swing bandleader Billy Eckstine. After high school, he enrolled at Berklee College of Music.

“John studied with me just about his entire time at Berklee,” recalls John Ramsay, chair of the college’s percussion department. “I knew he was good, but it wasn’t until some time after he graduated, when I caught him playing on TV with Patti LaBelle, that I realized the full spectrum of his abilities and talent. I remember thinking, ‘man, this must be one of those old Motown session guys,’ then the camera went to the drummer and, to my surprise, it was John Blackwell.”

After graduating in 1995, Blackwell joined the funk band Cameo, a three-year gig. In 1998, he moved to Los Angeles and was recruited by Patti LaBelle, playing on her Grammy-winning album Live! One Night Only. He met Prince while performing with LaBelle in Minneapolis. After a tour with Japanese singer Hikaru Utada, he joined Prince’s band, the New Power Generation. Blackwell played with Prince for 12 years, appearing on his Grammy-nominated album, N.E.W.S., and his Live at the Aladdin Las Vegas DVD. Since leaving Prince’s band in 2004, Blackwell has toured or recorded with Justin Timberlake, Diddy, Crystal Kay, Charlie Singleton, and Maze, to name just a few.

With his own band, the John Blackwell Project, he released the album 4Ever Jia, a tribute to his late daughter, Jia. In 2004, Blackwell established the Jia Kennie Blackwell Memorial Scholarship, which supports outstanding female musicians at Berklee.