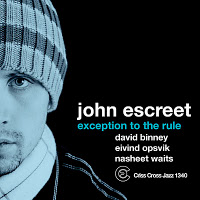 Currently residing in New York City, keyboardist John Escreet hails from the U.K and professes a novel outlook while making a significant impression with critics and progressive-jazz advocates based on five largely acclaimed albums. The artist once again aligns with the crème de la crème of modern jazz adventurists, including saxophonist David Binney on Exception to the Rule.

Escreet is a storyteller. With quirky detours, hard-hitting improvisation and lyrically resplendent theme-building jaunts, he excels when building tension, parlaying a little tenderness, and dishing out brisk unison choruses with his band-mates. And he uses electronic keyboards for ethereal undertones and over-the-top treatments.

The opener “Exception to the Rule,” is a study in striking contrasts. Escreet launches the festivities with a low-register piano groove, sparking notions of a 60’s detective thriller, where the quartet dodges traffic and summons lucid imagery of a car chase scene. The band continues its plight by speeding through curvy roads, and running stoplights along the way. Yet they break the tempo amid Binney’s flickering alto sax notes in concert with Escreet’s swirling chord patterns. In a loose sense, the musicians continue with the plot as though they are juggling a horde of propositions, abetted by drummer Nasheet Wait’s crash and burn pulses, the leader’s spiraling crescendos, and a blitzing finale that equates to a sense of urgency.
Escreet’s cinematic sensibilities add an additional treat to the rapidly moving parts. He’s also a strong composer and arranger who bring out the best in his band-mates. It’s a superb outing that offers an all-encompassing antithesis to the roads usually travelled within these jazz-centric frameworks. Putting aside the artists’ technical acumen, Exception to the Rule parallels Escreet’s investigate approach and cunning focus. Indeed, a top selection for 2011. – Glenn Astarita