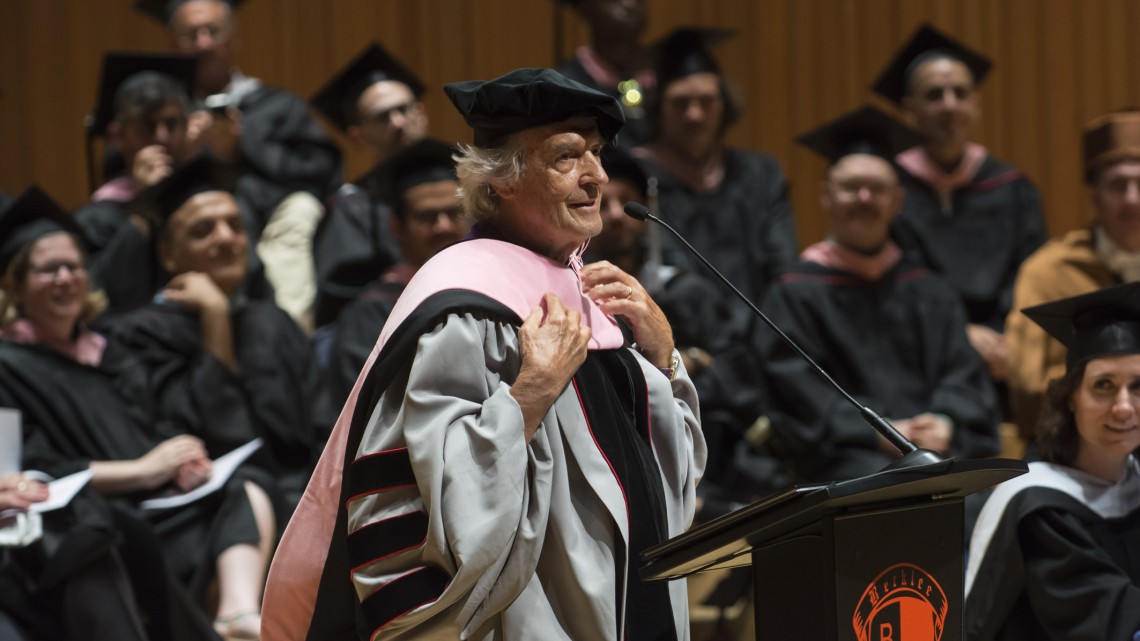 Berklee President Roger H. Brown presented an honorary doctor of music degree to legendary guitarist, composer, and pioneering bandleader John McLaughlin on July 10, during the commencement ceremony for the graduate programs at Berklee’s campus in Valencia, Spain. McLaughlin also performed as a special guest at the commencement concert at the Palau de les Arts Reina Sofia.

McLaughlin is a jazz fusion virtuoso whose extensive work as bandleader is complemented by his work with fellow luminaries such as Miles Davis, Chick Corea, and Paco de Lucia. He was at the forefront of the cross-cultural jazz surge of the 1970s, drawing on Indian music influences with the Mahavishnu Orchestra and Shakti.

“The role of music is today what it has always been in the past,” he said in his acceptance remarks. “It is the universal language of love, both human and divine. Music is our highest form of collective unity, since in any given concert there will be Christians, Hindus, Muslims, Buddhists, and atheists, all under one roof, enjoying music.”

He added, “Whatever we give to music with love and dedication is repaid a thousand times in ways that defy categorization. To be a musician is one of the greatest privileges.”

At the commencement ceremony, 137 graduates from 30 nations received master of music degrees in music production, technology, and innovation; scoring for film, television, and video games; and contemporary performance with a concentration in production; or master of arts degrees in global entertainment and music business.

The ceremony also celebrated the Valencia campus’ fifth year, during which time the campus has hosted more than 1,500 students from 71 nations and granted $4 million in scholarships to graduate students.