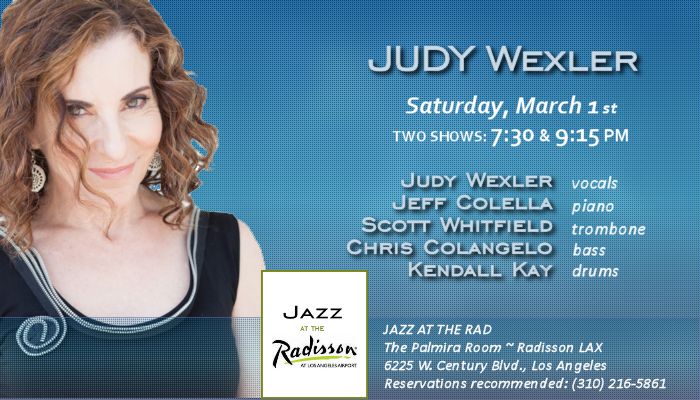 Jazz vocalist Judy Wexler appears at the Radisson LAX on March 1st in support of her latest release, “What I See.” Known for her inventive interpretations of underexposed gems and pure, clean voice, she will perform songs associated with a diverse mix of jazz and pop legends, including King Pleasure, Louis Armstrong, Sonny Rollins, Blossom Dearie, Richie Havens, Rickie Lee Jones, and Bob Dylan.

With a pliably warm, lustrous sound, she has been cited repeatedly by critics as having the rare ability to find the essential truth of a song. According to All About Jazz, “Judy Wexler is more than a mere singer of songs. She’s an actress, mood painter, song archaeologist, and vocalist par excellence. ‘What I See’ is a marvel of sincerity and beauty.” Music Man Blog says, “She has the rare ability to magically combine the story with her beautiful voice and captures the full attention of the listener. ‘What I See’ is one of the best jazz albums of 2013!” 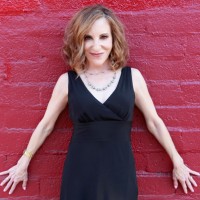 A touring and recording artist, jazz vocalist Judy Wexler has headlined at jazz festivals, performing arts centers, and major jazz clubs both nationally and internationally. With a pliably warm and lustrous sound, she has been cited repeatedly by critics as a singer who finds the essential truth of a song. Her latest album, What I See, released in Fall 2013 on the Jazzed Media label, explores music from a diverse array of material, including affecting movie themes, rarely heard jazz gems, and inventive interpretations of King Pleasure, Louis Armstrong, Billie Holiday, Benny Carter, Richie Havens and Rickie Lee Jones. All About Jazz calls her, “more than a mere singer of songs. She’s an actress, mood painter, song archaeologist, and vocalist par excellence.” According to Soundstage Experience, “Wexler deserves comparison with the very best jazz singers working today.” Judy’s debut CD, Easy on the Heart, released in 2005, made radio waves and introduced her to a wide jazz audience. Dreams & Shadows, her 2008 follow-up, debuted at #2 on the national JazzWeek chart and confirmed her ability to find great songs and effortlessly bring them to life. Judy was interviewed on NPR Weekend Edition by Susan Stamberg, who said, “From the evidence on her new second album, ‘Dreams & Shadows,’ Judy Wexler can sing almost anything.” Under a Painted Sky, Judy’s 3rd CD, which was released in 2011, topped the jazz charts and received a four star review in Downbeat. Judy has sung at the Montreal Jazz Festival, Dubai Jazz Festival, Tel Aviv Jazz Festival, San Jose Jazz Festival, and Temecula Valley Jazz Festival (where she opened the show for the legendary Mose Allison). Major jazz venues include three return engagements at New York’s Blue Note Jazz Club, Birdland, Kitano and Feinstein’s, Jazz Alley in Seattle, Blues Alley in Washington, DC, An Die Musik in Baltimore, Catalina Bar & Grill in L.A., Scullers in Boston, Chris’ Jazz Café in Philadelphia, among many others. “Though Judy Wexler’s reputation as one of the West Coast’s most compelling vocalists was cemented some time ago, What I See, her fourth release, suggests a heightened maturity, an even greater sense of assured imagination. Much like Abbey Lincoln—and at this point in Wexler’s musical progress, the comparison is quite valid—her skills as an actress are skillfully exercised, adding vivid shadings to her interpretations.” - Christopher Loudon, JazzTimes “Judy Wexler is more than a mere singer of songs. She’s an actress, mood painter, song archaeologist, and vocalist par excellence. What I See is a marvel of sincerity and beauty.” - Dan Bilawsky, All About Jazz “Judy Wexler has released only four CDs since 2005, when she debuted with Easy on the Heart, but she has a solid reputation among jazz critics and other musicians… this is my second review of a Judy Wexler disc and it confirms my feeling that she deserves comparison with the very best jazz singers working today.” Joseph Taylor, Soundstage Experience
Twitter Facebook