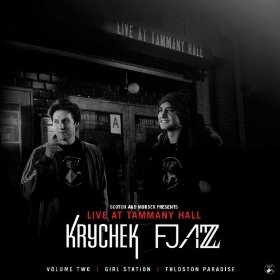 The electronic jazz duo known as Krychek and Fjazz have released their latest SP record, titled, “Live and Tammany Hall Vol. 2.” The release is comprised of a single and B-side, “Fhloston Paradise” and “Girl Station,” respectively. They have been published on the Scotch and Murder Music records label. The recordings were taken during a highly publicized and well-attended live performance at the famous Tammany Hall in New York City, and have received broad critical and fan acclaim since their unveiling. An ingenious, eclectic and intellectual combination of jazz and electronic dance music with ambient undertones, “Live and Tammany Hall Vol. 2” by Krychek and Fjazz represents some of the most intriguing electronic music produced this year.

New York’s Scotch and Murder Music record label was co-founded by Krychek, himself. His own music is marked by live instrumentation gleaned from his classical training as a player, as well as by his profound experience with synthetic sound and tone. He is widely recognized as a DJ and music producer, particularly in the realm of EDM music. His melodic musical style falls into the house music category, though his sweeping, fugue-like builds and strong background undercurrents often recall those of Hollywood film scores and soundtracks.

Fjazz is the professional name of Fernando Arruda, who obtained a rare 0-1 artist’s visa from the United States government to remain in the USA while making his music. The visa is only awarded to players who are deemed powerfully influential in and beneficial to the US music scene as a whole. Primarily a saxophone player, Fjazz is also capable at flute, clarinet, piano, guitar, and the EWI4000s (a synth clarinet with eight octaves). Like Krychek, he is also a music producer who merges live acoustic performances with high-quality, precision electronic music in New York City. His records are known for challenging the boundaries between improvised acoustic jazz and sound-designed electronic music.

“Live at Tammany Hall Vol. 2” by Krychek and Fjazz on Scotch and Murder Music is available online worldwide beginning 7 November 2013.

The SP “Live at Tammany Hall Vol. 2” is distributed globally by MondoTunes (www.MondoTunes.com) and is available at iTunes for convenient purchase and download