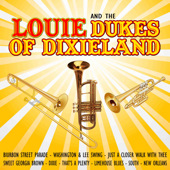 For some time SRI Jazz president, Shelly Liebowitz has been in discussions with the Estate of Frank Assunto the owners of most of the recorded material by The Dukes of Dixieland. Through an agreement these legendary recordings by the greatest Dixieland jazz group of all times will finally be digitally re-mastered and available on the SRI Jazz website http://www.srirecords.com and on iTunes, Amazon and all other major digital distribution outlets.

Included in this collection are long lost recordings by Louis Armstrong & The Dukes of Dixieland. These fantastic and very collectible recordings are being released as “Lost Treasures Vol#1 & 2. They include such treasures as Sweethearts On Parade, Sweet Georgia Brown, New Orleans, Bourbon Street Parade and many other greats.

In addition to the recordings with Louis Armstrong, a never before CD of The Dukes of Dixieland called “Live At The Famous Door” which was recorded at that famous New Orleans venue all those years ago, is also finally becoming available. Another collection entitled Family Favorites is also being released. This is a collection compiled by the family of all the songs that each family member considers a favorite.

“It is with great pleasure that we are able to make these important recordings available. The Dukes of Dixieland were favorites of mine from the first time I heard them as a teenager. The music is as vibrant, moving and fantastic as it was when first recorded. To be able to bring this wonderful music to a new generation is a personal and professional pleasure” said Shelly Liebowitz.

Digital distribution for SRI Jazz is through by BFM Digital in Valley Village, CA and physical product distribution is handled by City Hall in San Rafael, CA.

For additional information please contact Shelly Liebowitz by phone at 818-299-6297 or via email at shelly@srirecords.com