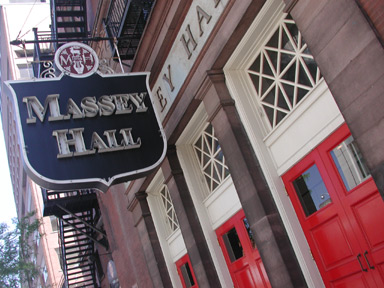 HERBIE HANCOCK with Orchestra: Acoustic at Massey Hall
Alain Trudel conductor
SATURDAY, OCTOBER 22, 2011 8PM
Herbie Hancock has long been considered one of the great musical innovators of our time. The 14-time Grammy Award winner kicks off the Jazz @ Massey Hall series with a rare unamplified, all acoustic performance. Toronto audiences will hear master musicians perform orchestral works such as the Symphonic Suite from Porgy and Bess in addition to Gershwin’s Rhapsody In Blue performed as it would have originally been heard in the Hall in 1934, with the true sounds of the space showcased. He’s been called America’s jazz ambassador, a futuristic technology advocate, a dedicated educator, and of course, a music luminary. Most of all, like all great artists he makes things new again.

SOPHIE MILMAN with special guest Robi Botos
FRIDAY, JUNE 1, 2012 8PM
JazzTimes Magazine refers to her as “Canada’s hottest young jazz singer,” and Toronto-based Sophie Milman, whose unique style has captivated audiences worldwide, has performed around the globe, hitting such landmark venues as the Hollywood Bowl, the Kennedy Center, and New York’s Blue Note club, sharing stages with Chick Corea, Chris Botti, and the Manhattan Transfer. Her fitting homecoming show in Toronto’s historic Massey Hall is sure to be a memorable part of the 2011|12 season. With a brand new album set for release this fall, Milman is sure to illuminate the venue with romance as she performs new material in addition to songs from her award-winning catalogue.