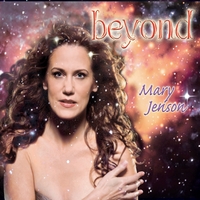 Growing up on an Air Force base, certainly created a strong basis for discipline and commitment, the military life afforded Jenson the opportunity to live in various states throughout her upbringing with her beginnings in formal studies at UNLV. Her experiences included being a radio disc jockey at KFMB and a full career in the financial industry.

Happily, Mary was able to leave her business career behind and begin to focus on music once again. Old dreams resurfaced and Mary began to study music and begin performing again. Attending Napa Valley College, Jazz Camp West and The Jazz School in Berkeley, Mary focused on bringing her voice back into shape and her musicianship skills up to snuff. 8 years later Mary has just released her second CD, Beyond, a jazz/world/pop fusion including 4 originals, 4 covers of contemporary pop songs and 3 jazz standards.

“Say My Name,” has a dreamlike quality with Latin-tinged flavors. Jenson’s mezza-soprano voice is cool and airy and floats across the fabric of well placed musical punctuations. “Come Together,” best known and penned by John Lennon and Paul McCartney, has a pulsing beat with an undercurrent of percussion and Indian flavors.

“Flying, Falling” gives the listener a chance to hear Jenson in a torch setting. Her tender and breathy voice is sensual and the lyric drips from her lips like honey. “Moon at the Window” a Joni Mitchell tune is given a convincing reading and the ensemble aptly cradles Jenson is a lush accompaniment fashion.
Closing the disc is “Things My Mother Said” reminded me of an album by another Newcomer – Carrie Newcomer that is; and her song “My Momma Said Its True” also filled with pearls of wisdom and inventive sayings.
Beyond is an album based in world idioms and cross bread with contemporary jazz ideas. Jenson has put together not only a pleasing listen, but truly a wonderful journey of songs that takes the listener to places in their mind and memory that evoke pleasing experiences. Truly not like any other vocal jazz album I have heard in 2011 – this is truly an embodiment of work that need to be added to any collection that features jazz and world recordings.