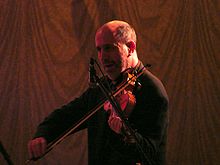 “Although I certainly do not deserve this, I am very happy to accept it metonymically on behalf of this incredible community of American folk and jazz string players who are my heroes and friends,” said Glaser.

Glaser is the founder and artistic director of Berklee’s American Roots Music Program, which teaches a wide range of folk-based styles, and uses a broader definition of “roots” to explore our western musical traditions, from Bach to African music. He previously served as chair of the Berklee String Department for 28 years. Glaser is the first and only recipient of the Stephane Grappelli Memorial Award, recognizing his contribution to teaching improvised string music. He advised on and appeared in the Ken Burns documentary Jazz, and has performed at the White House, and at Carnegie Hall with Yo-Yo Ma and Mark O’Connor.

Next post Mulgrew Miller, Iconic Jazz Pianist and Dear Friend to So Many, Dies at 57