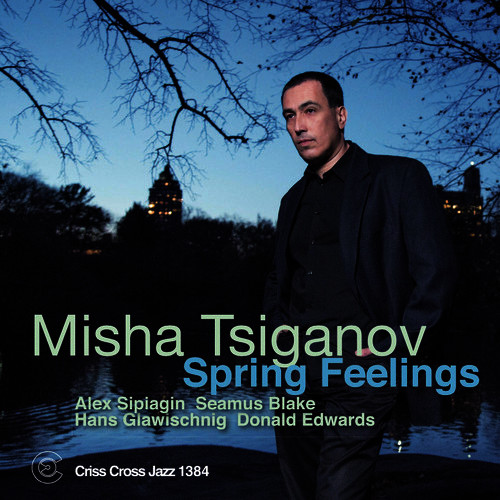 With Spring Feelings, Misha Tsiganov maintains his position as one of the most swinging and resourceful pianists on today’s jazz scene.

The new recording, his second for the Dutch Criss Cross label, sees him extend the boundaries of the material covered in 2014’s dazzling outing, The Artistry of the Standard. Tsiganov, born in St Petersburg, Russia, arrived in America in 1991 for jazz studies at Boston’s Berklee College of Music. Since then, he has steadily built up a solid reputation Stateside and internationally, producing several albums of his own, and performing with a host of very important musicians such as the late Norman Hedman and Michael Brecker, Chico Freeman, Joe Chambers and Hendrik Meurkens.

Spring Feelings is reflective of a range of genres – Latin, funk, be-bop and hard-bop among them – which are constituent aspects of Tsiganov’s kaleidoscopic compositional palette. Take the swanky, bluesy original, “Blues for Gerry”, for instance. It’s a nod to Criss Cross label boss, Gerry Teekens, alternating between a 4/4 swing section and a groove-laden motif featuring the guttural sonorities of tenor saxophonist, Seamus Blake, and the lycra-tight time keeping of drummer Donald Edwards.

This illustrates the sure footed nature of the writing on this disc: the gentle bossa nova glide of Jumping Michael which foregrounds trumpeter Alex Sipiagin’s outstanding trumpet playing; the heartfelt balladry of October in Kiev; and the inventive orchestration of the title track – all examples of Misha’s affinities for imaginative melodicism.

The two Wayne Shorter compositions, Infant Eyes, and Yes or No, stand out on account of the way Misha has re-conceptualised them. They are also unshakeably anchored by the acoustic bass playing of Hans Glawischnig.

What comes across clearly, especially in Schwartz and Dietz’s You and the Night and the Music and Weisman, Wayne and Garrett’s The Night Has a Thousand Eyes, is a willingness to step out of the box and take creative risks with the jazz chestnuts, breathing new life into old material, and ultimately taking the improvisatory tradition to new audiences.