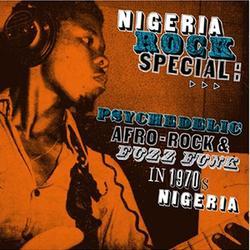 It was the era of national reconstruction (after a particularly bitter civil war), Udoji awards, military coups, OPEC-fuelled prosperity, FESTAC, and a naira that reigned supreme.

Indeed, the decade of the 1970s represents not only a period when oil money flowed as liberally as palm wine and bonhomie, it also marks ten years of the most impactful music ever produced in Africa’s most populous nation.

Journalists are a pretty wary bunch, especially when presented with anything clamouring to be “definitive”. However, the triple CD collection entitled Nigeria 70: The Definitive Story of 1970s Funky Lagos (Strut) comes frightfully close to its claim.

The sheer variety of the material recorded on this compilation is breathtaking. CD1, for example, begins with an unusually mellow-voiced Fela Kuti singing Olulufe Mi as a member of the very experimental Koola Lobitos. The tune embodies the influence of highlife – a blend of calypso, Latin America clave and jazz – which swept through West Africa like a harmonic Harmattan during the 1960s and 70s. Highlife, developed by Ghanaians such as maestro E.T. Mensah, was suffused with the heady optimism of independent African nationhood.

In Nigeria, highlife’s standard bearers included Victor Uwaifo and Victor Olaiya. Other cuts on CD1 include Segun Bucknor’s La La La, heavily drenched with James Brown-meets-Jimi Hendrix funk and soul music appropriations; Tony Allen’s hypnotic drum patterns on No Discrimination; and Bongos Ikwue coming across like an authentic American southern bluesman, on the politically incorrect Woman Made The Devil. If Ikwue appears for the “Middle Belt” of Nigeria, Afrobeat’s most northern representative is Bala Miller & The Great Pirameeds of Africa, with Allah ya fi na kowa. From the Hausa-influenced remove of his Costain Club in Kaduna, Miller was in fact one of Afrobeat’s most fascinating hybrids.

The potent pot-pourri continues on CD2, beginning with Orlando Julius’ Alo Mi Alo. Julius, an accomplished singer and saxophonist, is an often-overlooked operator, who forged new directions with traditional highlife. After studying for a degree in California, Julius shared musical stages with the likes of Isaac Hayes, Gil Scott-Heron and Hugh Masekela, among others. Among CD2’s other gems are the Lijadu Sisters, the lone female group of the compilation who are delightful with Orere Elejigbo, as well Fela Kuti, who is joined by Sandra Akanke Isidore on the runaway hit Upside Down. Imitation is the highest form of flattery; the Jos-based Sahara All Stars’ Enjoy Yourself is hardly distinguishable from any of the songs in Fela Kuti’s staggering catalogue.

CD3 is the compilation’s piece de resistance, a documentary pulling together interviews with seminal Nigerian musicians and musicologists or the 1960s and 70s. There are swathes of rare music, interviews with Afrobeat-influenced British rock drummer Ginger Baker, and two-tone innovator Eddy Grant, as well as poems from Nigerian Nobel laureate Wole Soyinka and Charlie Dark. The manner in which the documentary is put together and the seductive voice-over of the narrator, brings alive the up-tempo tenor of the times. All that remains is a good film to accompany it all.

On the one hand, it may be argued that the title of the compilation is a misnomer. Does music produced by a clutch of artistes residing in such geographically far-flung locations as Ibadan, Jos, Makurdi and Kaduna, for example, speak essentially to 1970s “funky Lagos”? On the other hand, the Lagos of the times was the epicentre of an emerging national musical culture from which tsunami-like waves of rhythm and stylistic influence fanned out all over the country, penetrating many of its ramparts, and touching musicians far beyond the lagoons of Eko.

Fela Kuti’s musical output was contextualised by direct confrontation with the military governments of the 1970s. He drew purposefully on musical influences such as the rock sonorities of Ginger Baker, West Indian calypso, Latin American music, jazz, highlife, Black Power politics and soul and combined these with acerbic pidgin-English and Yoruba lyrics which were widely adopted as protest anthems.

This eclectic approach mirrors the Tropicalismo movement in Brazil, which also emerged in response to a military dictatorship.

A most unforgivable fault in an otherwise impressive compilation is the omission of Prince Nico Mbarga’s music. This singer of Nigerian-Cameroonian parentage brought out the massively popular Sweet Mother, in 1977, braiding together Igbo high-life and African rhythms. Mbarga’s inimitable sartorial style was not overlooked – he is the model on the CD package’s front cover who so succinctly personifies the originality of the 1970s.

Yet another curious omission is the fact that King Sunny Ade is the only representative of Yoruba JuJu music on the compilation. After his apprenticeship with Moses Olaiya’s Federal Rhythm Dandies, Ade formed his first band, the Green Spots, in 1967.

These criticisms apart, Nigeria 70: The Definitive Story of 1970s Funky Lagos powerfully illustrates the artistic legacy of one of Nigeria’s most momentous decades.