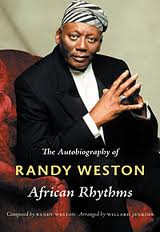 Pianist, composer, bandleader, National Endowment for the Arts Jazz Master, Randy Weston’s long-anticipated, much-talked-about, consciousness-raising, African-centered autobiography, African Rhythms, is a serious breathe of fresh air and is a much-needed antidote in this world of mediocre musicians, and men. He takes the reader on a wonderful, exciting journey from America to Africa and back with the ease of a person who loved every minute of it. The book is hard to put down and is an engaging, pleasing literary work that is worthy of being required reading in any history or literature school course. Weston is very adept at convincing the reader that not only does he deeply appreciate Africa, but, that you should too. He does not waste time praising the virtues, achievements and historical significance of Africa and early on in the book calls the continent the cradle of civilization, the place where all mankind began.

This should come as no surprise to those who have followed his career and have seen him perform in splendid, sometimes flowing African attire. In African Rhythms, he let it be known that this attitude and lifestyle came from his Panamanian-born father, Frank Edward Weston, whose parents were Jamaican, and who had lived in Cuba, before migrating to the Bedford-Stuyvesant area of Brooklyn, New York. His father taught him that Africa was not a place to be ashamed of and that African people in America and the Caribbean had been brainwashed to think otherwise.

“My father descended from the Maroons, a fierce and legendary people who never surrendered to the English during colonization,” Randy wrote in the very first chapter (“Origins”). “The Maroons were ferocious fighters–they escaped captivity and preferred freedom in the Blue Mountains (Jamaica) over bondage–and that spirit was deep in my dad’s blood.” There is no doubt that it was and still is very deep in Randy Weston’s blood. As the old saying goes–the fruit didn’t fall too far from the tree. Weston also has glowing words for his mother, Vivian Moore, whom he called “a wise unassuming woman from Meredithville, Virginia.” Although his parents separated when he was three-years-old and he lived with his father during his early years, his mother and father remained very close. It is clear from reading the book that they both played an integral part in raising the tall child and that they both encouraged him to become an independent thinker and a musician.

African Rhythms traces his formative musical career from the beginning when he was hanging out in the homes of the many Brooklyn musicians, like Max Roach, Ray Abrams, Duke Jordan and others. It was this experience that led him to want to be a musician. Later, he would be drafted in the Army, become a Berkshire chef, then a pianist who would later go to Africa, and lived there for several years, and gain a name as one with a distinctive sound. The book shows how he started out as a musician who was hesitant and unsure about playing professionally to one who gain confidence as time progressed. It is a testament to hard work, discipline and, most of all, humility. Weston, all throughout African Rhythms, is quick to place praise on others, namely the masters who came before him like Duke Ellington and Thelonious Monk. He writes in a very special way about the composer/trombonist Melba Liston and how she helped him with one of his most noteworthy accomplishments, the recording “Uhuru Africa,” (Uhuru means freedom in Swahili). This is a very touching part of the book that warms the heart because Ms. Liston was ill throughout most of her career and faced a great deal of discrimination because she was black and a female. Randy continued to use her time and time again because to him she was an excellent artist first and most of all.

African Rhythms is skillfully put together, using a call and response method, where Randy would write something about his acquaintances and his fellow musicians and associates would in turn write about Randy Weston and his impact on the musical, artistic and intellectual world. It contains several photographs, a complete discography (which includes a listing of all the musicians on the date), a page of awards and citations, and an index. It also includes a conclusion that superbly sums up what this inspiring, illuminating, straight-forward book is all about: “God has given me a gift which I project into the piano,” he wrote. “My message in the music is unity for our people, to be proud of who we are and what we have contributed to the world. This music will live forever and that is my success.”