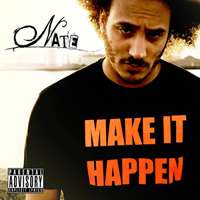 His music and urgent poetic flow sweeps up a whole host of influences in the rhythmic undertow.

Jazz, reggae, rock, South African music, and drum’n’bass, are among the myriad genres showcased in his art.

The 27-year-old grew up on the banks of the River Thames in the gritty Woolwich area of South East London. He nurtured a fondness for emcee-ing and the turntables during his teens, and paid keen attention to music he listened to on pirate radio stations.

What separates Nate from his British peers such as Dizzy Rascal and Tiny Tempah is his hard-hitting social and global consciousness paired with a gifted, penetrating vocal delivery. Nate has opted for the proverbial road less travelled; he brooks no compromise in the process.

His two CDs, Life and Lyrics (2010), and Make It Happen (2011), should be required listening for anyone who wants to know what time it is in UK hip-hop.

It is hoped he will stand the test of time.

Previous post SFJAZZ Launches New Online Venue - Are You Listening? A place for the conversation of jazz in today’s culture.