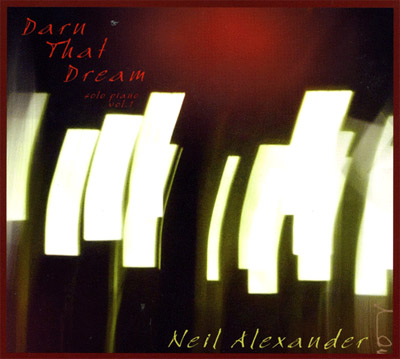 This Concert will be Streamed on the web –
stay tuned for the streaming URL.

Neil Alexander releases his first solo piano CD, a project brewing since first stepping before an audience as a young musician in Nyack, NY. Neil is known for blazing synthesizer & electric keyboard with his own group “NAIL”, “The Mahavishnu Project”, and “The Machine” as well as association with equally inventive musicians Steve Lawson, Herb Deutch, Trip Wamsley, Tony “Thunder” Smith and James Musser. “Darn That Dream” represents a return to Neil’s roots, and demonstrates his love of and connection to the piano. Recorded at the Falcon in Marlboro NY, Darn that Dream contains seven original compositions and four standards: two radically different passes at the Van Heusen/DeLange title track, an impressionistic reading of the early Pat Metheny tune “Sirabhorn” and “My Foolish Heart,” a song immortalized on piano by the great Bill Evans among others. It thus situates itself as a jazz recording, and it certainly is that; but Alexander’s gestures are as likely to come from the classical world at any given moment, and even, on occasion, from the becalmed realm of the New Age, though the placidity never lasts long. This is challenging music for player and for listener. Composition and improvisation seem deeply intermingled from the get-go. Moments of accessible beauty are frequent and fleeting, giving way to the more difficult gratifications of advanced harmonic improvisations and frenetic, percussive fits and spells.

For the most part, this project favors slower, expressive tempos and rubato, but it is far from meditative and serene; Some solo pianists prefer to paint exclusively with the piano’s felt and wood; Alexander is not afraid of hammer and steel and the high peaks of the grand. His calling card is his intensity, his wholehearted willingness to embrace the dramatic range of the instrument. The roiling bass lines of “A Question of Energy” recall the hyper-exactitude of Chick Corea. Exquisite ballads such as “Stop for a Moment (and Listen)” and “Whisper of Angels” share some of the Impressionism of Evans and Jarrett, but always with a greater propensity to upset the applecart in ways that are exciting and gripping. The bipolar “Blues for Martha (Graham)” suggests that Alexander is not entirely at odds with Cecil Taylor and the other action pianists of the world.

An additional feature is an acoustic version of “Everyman”, the single from NAIL’s 2007 release “Tugging at the Infinite”. The release of “Darn That Dream” coincides with Neil Alexander’s landmark “100 Years of Spring” performance series, a sponsored project of Artspire, a Program of NYFA, a 501(c)(3) tax-exempt organization.

These appearances celebrate the centennial of the controversial May 1913 Premier in Paris of Igor Stravinsky’s Le Sacre du Printemps (The Rite of Spring) and a goal to bring the piece to a wide audience in concerts and education settings. Neil’s passion for the composition inspired his own solo-piano arrangement of the orchestration. To honor the spring season and food, the program continues to be available to farm/ food markets internationally. A complete version of “The Rite”, and concert excerpts from the tour will comprise “Solo Piano Vol. 2”, slated for 2014.

Track listing and composer:
All compositions by Neil Alexander / Meate Dream Music B.M.I. except where noted