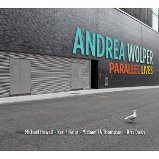 Andrea Wolper is not only a singer, but also a writer. Her appreciation for words and stories and described images is evident. And she has a sense of humor. For instance, the first song on her new album, Parallel Lives, is Joni Mitchell’s “Song to a Seagull.” Sure enough, a little seagull dwarfed by a skyscraper named “Andrea Wolper Parallel Lives” on a New York street appears on the cover design.

“Song to a Seagull,” apostrophic and meditative, indeed dovetails with Wolper’s storytelling abilities as she wistfully wonders, “Where are the footprints/ That danced on the beaches?” And the point eventually is? That the singer remains torn by the contrast between civilization and nature, while the seagull, “silly seabird,” stays unworried…and then dreams. With minimal accompaniment, Wolper lays out the imagery that Mitchell sketches with phrases like “cobblestone sea,” “concrete beaches” and “blossoms” hanging “from their store window tree.” Why aren’t lyrics written so well lately?

Wolper writes (and thus sings), “Somewhere in my wicked, miserable past / There must have been a moment of truth.” Say what? A new song about the balance between evil and truth? With such thought applied to its music, Wolper’s new album, Parallel Lives, naturally involves vivid imagery, intriguing situations and universal themes. Literature can contain the same components; accordingly it’s not surprising that Wolper writes too. Books. Poetry. Essays. Scripts. Political tracts. Songs.

As would be expected from the lyrics already quoted, Wolper has produced an intelligent, whimsical and heartfelt album consistent in the acuity of its observations and reveling in not only its musical possibilities, but also the sentiments underlying the songs. That’s not to say that the music is uniform in its sound or feeling. The songs vary from the deep blues feel of Buffy Sainte-Marie’s “Maple Sugar Boy” to the jauntiness and lilt of Wolper’s own “The Girls in Their Dresses.” Still, Wolper’s buoyant spirit and the richness of her voice connect all of the disparate delights of the album into a cohesive whole.

Wolper and her back-up group of musician-friends freshen the standards chosen for the album through rhythmic tweaking or changes of attitude, altering expectations. Thus, “Who Will Buy?” the plaintive and then rousing song from Oliver! isn’t plaintive at all (though it’s still rousing) as Wolper converts it into a charming samba, emphasizing the musical content instead of its dramatic moment. “Skylark” receives the same mode of musical appreciation, wherein the song’s feeling overrules conventionality as it avoids references to other versions.

Shrewdly, Wolper varies the songs’ arrangements, as well as her selectionsof the songs themselves—evidence of her versatility and wide-ranging interests. The swaying six-eight “Save Your Love for Me,” with its understated sultriness, is far removed from the sentiment and rhythm of “Blue Wind” with its impressionistic introductory improvisation of clicks and trills and chirps and note-smashing and dissonance and whispers and freed bass lines. Wolper’s cadenced soliloquy bridging the beginning and ending melody of “The Girls in Their Dresses” would quickly become tiresome if the technique were repeated throughout the album. But it isn’t. As a refreshing spoken expansion of the song’s theme, it’s a delight made possible by Wolper’s theatrical and poetic experience. Wolper’s rediscovery of Mitchell’s “Be Cool” brims with walking-bass exuberance and the snap of dramatic pauses.

Mention must be made of Wolper’s back-up musicians whose cohesion and instant underswtanding of Wolper’s impulses contribute to the album’s success. Pianist Kris Davis’s whirling, rippling, forceful solo on “Blue Wind,” invigorating and effective in energizing the group, becomes the highlight of the track. On “Something Good,” bassist Ken Filiano begins the performance with a mysterious melodious solo that adds to its suggestion of ambivalence for good or evil. Guitarist Michael Howell, with keen responsiveness and purity of tone, complements Wolper’s voice as the two of them express “Skylark,” or as Howell and Wolper trade choruses on “Be Cool” or phrases on “Something Good.” And drummer Michael TA Thompson provides the album’s rhythmic character, unobtrusive but commanding, like the soft clip-clopping samba feel of “Who Will Buy?” or the wind noise and bass drum thumps of “Blue Wind.”

With Parallel Lives, Wolper has identified herself again as a non-categorizable singer who borrows from the past, develops songs for the present and carves a path for the future for singers who use jazz as a reference point. However, in the end, Wolper creates personalized music that reflects a lifetime of musical interests, jazz and otherwise.

Previous post ‘THE CAMELLIA SESSIONS’ SET TO RELEASE A COLLECTION OF LEGENDARY RECORDINGS REINVENTED AND RE-LIVED TO CREATE A MULTI-VOLUME JAZZ, WORLD AND LOUNGE MUSICAL EXPERIENCE