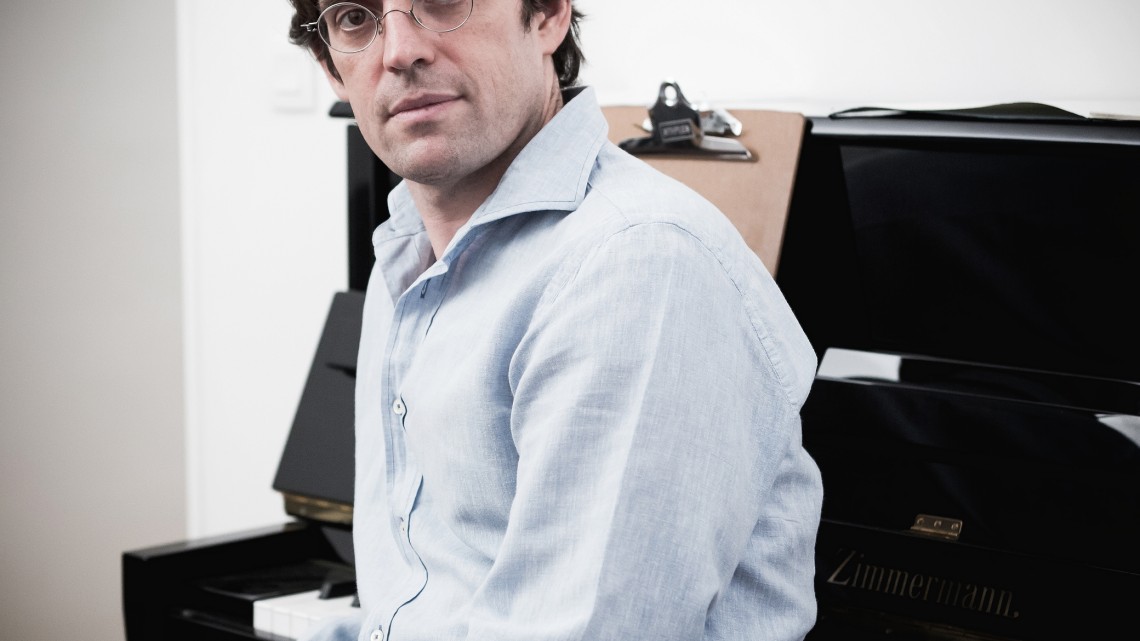 What: Patrick Zimmerli Quartet featuring Ethan Iverson, Chris Tordini, and John Hollenbeck
Where: Le Poisson Rouge, 158 Bleecker Street, NYC, Train: A/B/C/D/E/F/M West 4th Street
When: Saturday, September 10, 2016 at 7:00 p.m.
Tickets: $15. To purchase, contact Le Poisson Rouge at 212.505.3474, or visit lpr.com.
New York, NY (FOR RELEASE 08.03.16) — On September 10, 2016, at 7:00 p.m. at Le Poisson Rouge, the Patrick Zimmerli Quartet, featuring Ethan Iverson, Chris Tordini, and John Hollenbeck, will present “Clockworks,” the conclusion of a compositional arc that began 25 years ago with the recording of Shores Against Silence by Zimmerli’s original quartet.
The music from Shores featured a highly complex approach to rhythm, harmony and form, and was both preoccupied with the jazz tradition and departing from it radically. The often extravagantly abstract music was always grounded in melody, and displayed an interest in extra musical sources such as mythology, the visual arts, and literature, that was uncommon at the time.
After simplifying his style and focusing on writing music for classical ensembles large and small, and then engaging in various genre-mixing adventures with collaborators ranging from Brad Mehldau to Luciana Souza, Zimmerli now revisits his early aesthetic investigations in “Clockworks,” commissioned by Chamber Music America.
Renewed interest in Shores Against Silence – which, circulating as an underground tape in the early 1990s, influenced such musicians as Ethan Iverson, Joshua Redman, and Rudresh Mahanthappa – has spurred Songlines Recordings to release the music commercially for the first time this November; Clockworks will be released in 2017 as a pendant CD. This two-CD conversation between past and present, spanning a quarter-century’s worth of artistic exploration, offers a unique view on the evolution of musical and artistic ideas, and even on the changes in the society that brought them forth.
Clockworks is about scales of time: time within a beat, within a phrase, a movement, a piece, and within an oeuvre, over a span of decades. The piece itself modulates stylistically, as hallucinatory abstraction and glorious melody alternate, cohabit, and strive for preeminence. It also features an unusual dialogue between improvisation and composition, as both tightly controlled and very open passages are intermixed. More generally, the piece is about what it has been like to live in a changing social panorama from the late eighties through the present moment.
About Patrick Zimmerli
New York- and Paris-based composer/saxophonist Patrick Zimmerli writes a sophisticated yet approachable hybrid of contemporary classical and jazz music. Recent collaborators include Joshua Redman, Brad Mehldau, Brooklyn Rider String Quartet, Brian Blade, Luciana Souza, the Knights Orchestra and the Escher String Quartet. His music has been performed at Carnegie Hall and Town Hall in New York, Wigmore Hall in London, Salle Pleyel in Paris, Sala São Paolo in Brazil, the Vienna Konzerthaus Grosser Saal and the new SF Jazz Center.
Zimmerli has written numerous orchestral, chamber and choral works, including two four-movement Piano Trios for the Seattle Chamber Music Festival and two four-movement Piano Concertos with jazz percussion, written for the Metamorphosen Chamber Orchestra and pianists Ethan Iverson and Sonia Rubinsky.
Zimmerli’s Aspects of Darkness and Light, an evening-length work commissioned by the Seattle Commissioning Club, was recently recorded by Joshua Redman, Brooklyn Rider, bassist Scott Colley and percussionist Satoshi Takeishi for Nonesuch Recordings (Warner). His Signs of Life was recently released on Deutsche Grammophon by French pianist Thomas Enhco and percussionist Vassilena Serafimova. Upcoming projects include a large-scale oratorio for male choir, operatic tenor, jazz percussion and piano on the work of Alan Seeger, to be premiered at the storied Invalides in Paris in 2017; and a collaboration with the Paris Percussion Group at the Centre Pompidou in Paris.
Zimmerli was awarded the 2015 Chamber Music America New Jazz Works Grant, supported by the Doris Duke Charitable Foundation. He was also the winner of the CLICK People’s Orchestral Commission from the Colorado Music Festival. Other commissions have come from the Saint Paul Chamber Orchestra, the Colorado College Summer Music Festival, the Ying String Quartet, Brown University, violinist Timothy Fain, and the Arizona Friends of Chamber Music. From 2002-05, Zimmerli served as Composer in Residence with the Metamorphosen Chamber Orchestra. Awards include first prize in the first annual BMI/Thelonious Monk Institute Composers’ Competition.
Zimmerli music has been featured in MoMA’s Summergarden series, at the Guggenheim Museum, on NPR and at the Jazz Composers’ Collective. His work has been recorded on the Naxos, Nonesuch (Warner), Blue Note, Arabesque, Antilles, Songlines, Jazz City and Naïve labels. Zimmerli is the curator of the IN/TERSECT concert series at Bryant Park in Manhattan.
# # #
For more information about Patrick Zimmerli, please visit patrickzimmerli.com.
Tags: albumcdconcertethan iversonrecordingrelease

Next post CD Release: Matt Wilson, Beginning of a Memory