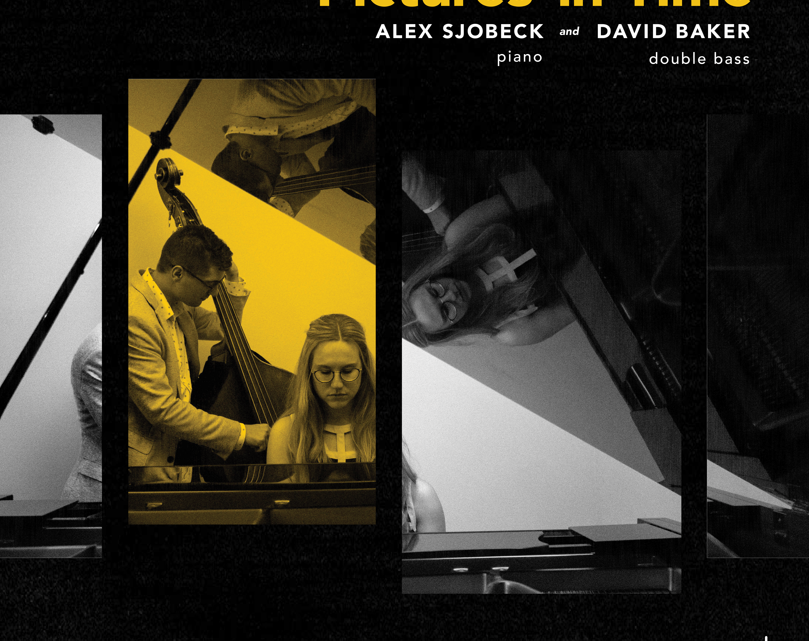 Longstanding collaborators pianist Alex Sjobeck and bassist David Baker have been performing, rehearsing, and creating together for over half a decade. With shared musical experiences in big bands, septets, and a steadfast trio, the two composer-performers now unite with their debut, Pictures in Time, to express a distilled collection of nine original works that act as a “musical diary”. These pieces pay homage not only to the creative tradition of piano-bass duos throughout jazz history, but also to their growth of understanding of themselves and each other, drawing on the musical roots of where their families originated.

The title of the album acts as both an immediate description and a metaphorical lens through which to interpret its sonic journey. Pictures in Time stands as a collection of vignettes: a series of musical snapshots that describe and evoke the moments, emotions, and experiences in life that transcend time and ancestry. “Alex and I have a rich shared history where we tend to be a constant for one another with the only other constant being our past,” Baker says. “Pictures in Time is a title meant to represent that feeling of being connected to our pasts – how our ancestors and stories of our ancestors trickle down and affect who we are in our present day lives.” In addition to the title’s pensive implications, it also holds a physical element to it. Rather than viewing these scenes and stories in a traditional gallery, the audience must listen to participate in the art form of music, and thus each of the pictures are expressed “in time.”

Musically, Sjobeck and Baker are continuing a rare but richly beautiful musical legacy heralded by duos such as Bill Evans and Eddie Gomez, Hank Jones and Charlie Haden, Nitai Hershkovitz and Avishai Cohen, and Kenny Barron and multiplicity of bassists. Steeped in this tradition, Sjobeck and Baker step forward combining it with elements of classical, folk, semitic music, and pop to make something that is uniquely theirs that is set apart in the current musical environment.

As artists, both Sjobeck and Baker have firm concepts of self and of the strengths and flairs that mark their individual artistic statements. Sjobeck’s approach to the piano presents a distinctive form of intricacy, using each hand distinctively and collaboratively to achieve a mastery of expression that feels on par with a full orchestra. Baker views the bass far beyond its typical role, and performs in a way that combines individuality with the roots of blues and bebop to create a curated, vertical approach that uniquely integrates harmony and rhythm. When these two forces combine, the duo crafts a compositional and performance approach that leans not on the constraints of their instrumentation, but the untapped experimental potential of what could be achieved. “We have a studied background with wildly different influences, a long personal history, and a humanist need to tell a story resulting in music that appeals to non-jazz enthusiasts and jazz in-crowd alike,” Baker says. “The duo composes for themselves in true experimental fashion, ignoring the traditional boundaries of the group.”

The deeply human and timeless expressive elements of the album are well captured in the track “Liberation”. The piece is unified around the thematic idea that people often feel the need to hide an aspect of themselves in order to be accepted. This theme appeals to the 21st century individual, as well as the ancestors of Sjobeck and Baker who, in some cases, fled Europe to create a new life in America. Musically, “Liberation” underwent extensive reimagining until the duo felt the final product fully served its conceptual purpose, resulting in a combination of complex melody, arco bass, and a harmonically simpler blues form for the solos. “Aravah” is a piece whose title comes from the Jewish holiday of Sukkot. The title refers to a verdant branch of a willow tree, and symbolizes the pursuit of good deeds with no expectation of recognition or reward. Musically, “Aravah” features a deeply captivating melodic and rhythmic solo by Baker. “Answer Song” is a standout track. Creating a meditative atmosphere, “Answer Song” is a response to the maximalism of contemporary art and finds beauty in elegant simplicity and features solos from both Sjobeck and Baker. Sjobeck’s compositional voice shines through on “Like A Pop Song,” an original that stands in stark contrast to the flashy trends of modern jazz and soars with the power of musical authenticity.

The collaboration process on Pictures in Time was an act of creativity in itself, shaped by the nature of the times. The duo began piecing together the compositions on the album during lockdowns in the United States. Going from a myriad of regular in-person rehearsals, Sjobeck and Baker quickly transitioned into a new collaborative space: Logic Pro. Each would record and create audible sketches for a piece, and the other would add their musical thoughts into the fray, creating a traceable developmental path for each piece that allowed it to become a true collaborative work. This process was woven together with lengthy conversations discussing what could change and in which direction the music should go next. “In some instances, the songs were fleshed out quickly and in others the initial demo would be unrecognizable from the final iteration,” Baker explains. “The entire process was a whole new way of composing that each [of us] had to learn and thankfully both were up for the challenge.”

Sjobeck and Baker’s work shines as a creative triumph of determination, expression, and seamless collaboration. With Pictures in Time, the duo has crafted statements that are powerful most poignantly in the juxtaposition of their deeply personal nature with an intrinsically universal expression that appeals to human nature. By making musical statements rooted in who they are, where they came from, and the potential of that which could be, Sjobeck and Baker have developed a rare thing: a unified duality, and an expectant mark on a bountifully untapped tradition.

Pictures in Time releases on Next Level on September 30th, 2022.

NEXTLEVEL is an imprint of Outside in Music, dedicated to early career and first-time bandleaders seeking to make an impact on the music. OUTSIDE IN MUSIC is a record label and media company that exists to serve musicians. We are a community that strives to lift its artists above the noise of the 21st-century music industry and make music that expresses the sounds of today’s wide-ranging jazz and creative music scene.