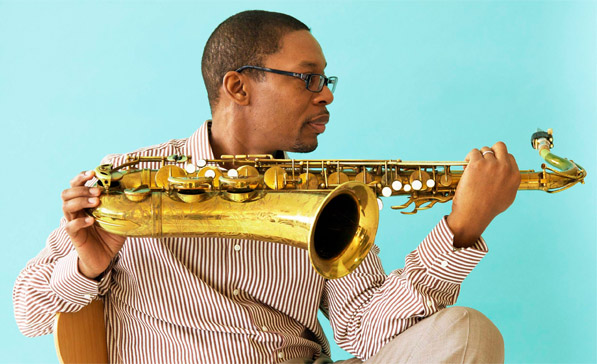 Praised for his music’s “elusive beauty” (DownBeat), and for his “style informed by tradition but not encumbered by it” (Philadelphia City Paper), saxophonist Ravi Coltrane takes a bold step in his creative journey with Spirit Fiction, his Blue Note Records debut.

“There was something about that lineup that I knew I wanted to revisit someday,” Coltrane says. “The energies of the two groups on Spirit Fiction are unique. The quintet stuff is looser, and the quartet has played together for close to 10 years so it has that particular sound.”

Joe Lovano, a Blue Note recording artist since the early 1990s, served as producer of the quintet sessions. Lovano also joins the quintet on tenor saxophone for an explosive version of Ornette Coleman’s “Check Out Time,” from Coleman’s 1968 Blue Note album Love Call.

“I’ve always produced my own recordings except for the first one, Moving Pictures, which was produced by Steve Coleman,” says Coltrane. “Joe was a truly supportive producer on this project. He has been an important figure in my life for over 20 years — the first record I heard him on was Monk In Motian, with Geri Allen.”  Lovano also plays alongside Ravi and Geri Allen in an intimate reading of Paul Motian’s “Fantasm.”

Having helped mark Blue Note’s 70th anniversary as a member of the Blue Note 7 (documented on the 2009 release Mosaic), Ravi is thrilled to join the Blue Note roster. “[Blue Note Chairman Emeritus] Bruce Lundvall has been very supportive of my work and this project.  I’m honored to be on Blue Note under his watch. He’s very music-driven, which is incredibly encouraging. He’s continued the Alfred Lion example of putting music first and taking chances.”

According to Coltrane, “The title, Spirit Fiction is an abstract turn of phrase that came out of a stream of consciousness. The phrase seemed to mesh with the layered, superimposed nature of the title track.  It also felt like a gentle indicator of the “science” involved in recording that track. In some ways, it ultimately refers to the open ended idea of simply embracing imagination.”

The mysteriously grooving title track is a “mashup,” Coltrane explains:”The technique layers separate recordings together. Half the quartet records with a specific direction in mind, then the other half records with their own direction in mind. The idea is not to assemble but to imagine instead how things may interact. What is interesting is that the way we played on that piece is not unlike how the four of us would play together traditionally speaking.”

Born on Long Island in 1965, Ravi is the second son of John and Alice Coltrane. His father (who recorded the landmark Blue Train for Blue Note in 1957) died when Ravi was only two. Alice, a renowned composer and pianist, raised Ravi on the West Coast and proved a strong role model in her own right. Ravi had the honor of producing and playing on Alice Coltrane’s Translinear Light, released three years prior to her death in 2007.

A move back east to New York and pivotal stints with Elvin Jones, Wallace Roney and Steve Coleman led Ravi to begin asserting himself as a leader in the mid 1990’s.  He followed Moving Pictures and From the Round Box with Mad 6, In Flux, and Blending Times.  He also continued appearing as a sideman with the likes of McCoy Tyner, Jack DeJohnette, Jeff ‘Tain’ Watts, and Flying Lotus (a.k.a. Steven Ellison, Ravi’s cousin) , and as a co-leader of the Saxophone Summit with Lovano and Dave Liebman.

Ravi brings all of this rich experience to bear on the music of Spirit Fiction. His leadoff track, “Roads Cross,” is a quartet improvisation with a subtle plan: “We are performing as two duos, each duo with a reciprocal agenda regarding pulse and tempo. The directions overlap and even intersect and keep moving – a real energy and wholeness hopefully is created.” Later in the program, on “Cross Roads,” the quartet pursues the same improvisational idea with remarkably contrasting results.

Of the drum and tenor saxophone duet “Spring & Hudson,” Ravi recalls: “I always like playing duets. I sketched out a simple form with some odd measures and some breaks – something I thought would be fun to play in that context.  E.J. and I faced each other directly when we played it, and you get a different energy that way. This title is a nod to the Half Note.  The tiny stage above the bar compelled the musicians to literally face each other and that kind of proximity always affects the way musicians play together.”

“the change, my girl” is a title that came to Ravi in a dream. “People were at a session in the dream and someone said, ‘Let’s play “the change, my girl.”’ My reaction was, ‘OK, great.’ It was just another tune that we all knew. The ballad uses some delayed voice leading and harmonic rhythms that imply looking at one thing in more than one way.” The fiery soprano saxophone feature “Marilyn & Tammy” is named for Ravi’s aunt, songwriter Marilyn McLeod and her late daughter, Tamra Ellison. “Marilyn wrote ‘Love Hangover,’ ‘Same Ole Love’ for Anita Baker, she was under contract with Motown in the ’70s. She and Tammy were like best friends, and this tune reminded me of their energy.”

Spirit Fiction also features three striking pieces by Ralph Alessi, Ravi’s longest-standing musical associate. “I’m an admirer of Ralph’s compositions. I’ve always enjoyed playing his tunes and of course I wanted to record a few. I said to him, ‘Here’s what I’m planning, whadda ya got?’” We also hear the compositional voices of Paul Motian and Ornette Coleman — and it’s fitting that Ornette’s “Check Out Time” and Motian’s eerily evocative “Fantasm” (from Keith Jarrett’s Byablue) both featured the late saxophonist Dewey Redman, another of Ravi’s notable forebears.

One of the most personally informed song choices on the recording arose from a request from Ravi to Joe for suggestions on a Paul Motion tune (Motian passed away just one month prior to Ravi’s quintet session). Lovano had played “Fantasm” on Motian’s 1981 album Psalm and suggested the tune. “I felt a trio with Geri and Joe would be the most relevant setting”, says Coltrane. “I love the sound of two tenors, and with Geri you know you’re going to hear things that are really unique, the way she supports. It was a real privilege to play Paul’s music with Geri and Joe.”

Even as he foregrounds his own development and eschews any attempt to recreate the hallowed jazz past, Ravi Coltrane knows as well as anyone the importance of the music’s lineage. Reflecting on the place of Ornette and Motian, and implicitly his father, in the story of his own career, Ravi concludes: “If it weren’t for those guys, we wouldn’t be here.”