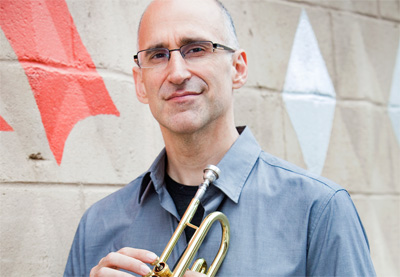 New England Conservatory’s Jazz Studies Department has hired two renowned musicians to join the faculty: jazz trumpeter/composer Ralph Alessi who will teach trumpet and improvisation and jazz saxophonist Brian Levy who will teach both saxophone and music history and musicology.

“I’m thrilled that Ralph Alessi has agreed to join our faculty,” said Ken Schaphorst, Chair of NEC’s Jazz Studies Department. His experience, both as an artist and as an educator, will provide a tremendous resource for our students.”

Schaphorst is equally pleased to have Levy on faculty: “After an exhaustive search, I’m very excited to have Brian Levy teaching at NEC. His academic and musical training is unusual for its depth and breadth. He will be a great asset to both the jazz and music history departments.”

Jazz trumpeter Ralph Alessi was born in San Francisco, the son of classical trumpeter Joe Alessi and opera singer Maria Leone. After earning degrees in jazz trumpet and bass and studying under the legendary Charlie Haden at CalArts, he went to New York, where he swiftly became a ubiquitous presence on the downtown scene. He has been a frequent collaborator with such notable musicians as Steve Coleman, Jason Moran, Don Byron, Ravi Coltrane, Fred Hersch, Uri Caine, and Dafnis Prieto.
In various configurations, including the quintet This Against That, Alessi has recorded nine CDs of original compositions that draw on everything from post-bop to neo-classical music. In 2013, he released Baida, a quartet CD on ECM records, and Only Many, a duo recording with pianist Fred Hersch on CAMJazz. In addition to his work as a leader, Alessi has appeared on approximately 75 recordings. He has earned wide critical acclaim for his work. The New York Times says: “Alessi’s tone conveys a rounded luminescence, like the moon in full phase.” JazzTimes notes that Alessi has “drop-dead trumpet chops and his music is as clean and airy and sophisticated and disciplined as post-modern progressive jazz gets.”

In addition to his post at NEC, Alessi has been on the jazz faculty at New York University since 2002 and is the founder and director of the School for Improvisational Music, a nonprofit entity currently holding improvisational music workshops in New York City and abroad. He also served on the faculty of the Eastman School of Music.
Jazz saxophonist Brian Levy received his Ph.D. in musicology from Brandeis University in 2012 with a dissertation that examines harmonic and rhythmic interaction in John Coltrane’s Classic Quartet. Previously, he earned a D.M.A. and M.M. in Jazz Performance from New England Conservatory and Manhattan School of Music, respectively.
He released his debut CD as a leader in 2010 and has performed widely throughout the world. As Robert Bush said in the San Diego Reader: “Levy’s aesthetic is firmly rooted in the ’60s tradition of tenor giants like John Coltrane, Sonny Rollins and Dexter Gordon. His sound is full and dark in the low resister — and remarkably centered throughout.”
Levy has taught undergraduate and graduate history, theory, and performance courses in such institutions as Brandeis University, Harvard University, and NEC. In addition to a performance and research focus on jazz, he has studied music theory and analysis, 18th and 19th century philosophy, and aesthetics. Levy is featured on and helped advise the production of four instructional jazz DVDs by Jerry Bergonzi.
The brainchild of Gunther Schuller, who moved quickly to incorporate jazz into the curriculum when he became President of the Conservatory in 1967, NEC’s Jazz Studies Department was the first fully accredited jazz studies program at a music conservatory. The Jazz Studies faculty has included six MacArthur “genius” grant recipients (three currently teaching) and four NEA Jazz Masters, and alumni that reads like a who’s who of jazz. Now in its 44th year, the program has spawned numerous Grammy winning composers and performers. As Mike West writes in JazzTimes: “NEC’s jazz studies department is among the most acclaimed and successful in the world; so says the roster of visionary artists that have comprised both its faculty and alumni.” The program currently has 114 students; 67 undergraduate and 47 graduate students from 12 countries.

Next post KAWAI and The Made In NEW YORK JAZZ COMPETITION