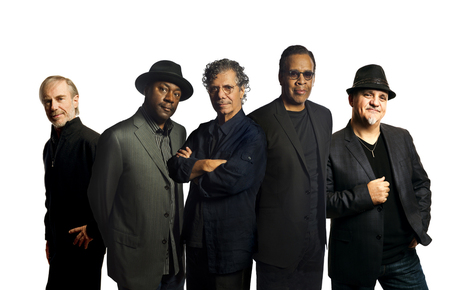 Return To Forever, whose mind-blowing experimentation in jazz and rock transformed the music world, will debut a historic new lineup this summer on a massive tour of 32 US cities that begins in Pittsburgh on August 7th. The tour brings a re-imagined musical dimension to both the wildly influential group and its repertoire.
Solidifying the tour’s once-in-a-lifetime experience, Zappa Plays Zappa, the musical tribute to Frank Zappa, will join the bill alongside “Return To Forever IV” (RTF IV), the legendary group’s fresh incarnation of core members Chick Corea (keys), Stanley Clarke (bass) and Lenny White (drums), along with Mahavishnu Orchestra alum and violin virtuoso Jean-Luc Ponty as well as guitarist-extrodinaire Frank Gambale
.
Working together with complete creative compatibility and steeped in the tradition of extreme freedom of expression, these five pillars of jazz and rock have prepared a must-see performance that will please fans new and old. Their ever-evolving set-list encompasses an amalgam of Return To Forever classics, highlights from each member’s solo repertoire, and brand-new compositions written for the RTF IV lineup.

“Since all the guys in the band are such good composers, I wanted to have everyone’s compositions add to the new RTF IV vibe. So we all agreed: let’s open it up — which is the way we like it, and I think the way the fans like it too.” – Chick Corea

On showcase will be the freshly released Corea, Clarke, & White project Forever, a two-disc set of 18 tracks that includes jazz trio standards, updated RTF-classics, new tunes and special guests: Chaka Khan, Jean-Luc Ponty, and original RTF guitarist Bill Connors. Released June 7, 2011 on Concord Jazz, a division of Concord Music Group, disc one is a best-of sampler from the triumphant “RTF-Unplugged” world tour in 2009. Disc two is a bonus CD with its own story. DownBeat points out, “The three seasoned veterans sound wildly happy to be playing together again” while the New York Times says, “Mr. Clarke and Mr. White are a hyperfluent, assertive and malleable rhythm team, whether swinging in a post-bop vein or opening the throttle on a groove.”

RTF IV is recently off a successful run across Australia that was deemed “nothing short of wonderful” and “a renaissance.”

Zappa Plays Zappa was founded by Dweezil Zappa to bring the music of his late father, Frank Zappa, to contemporary audiences through a series of international performance tours dubbed “Tour De Frank.” Dweezil’s fellow band members are among the most brilliant and innovative players working in any genre and, collectively, rise to the challenge of bringing the legendary Zappa repertoire alive in concert. Dweezil Zappa, a 2009 GRAMMY Award winner, continues to record and perform on a regular basis around the world.