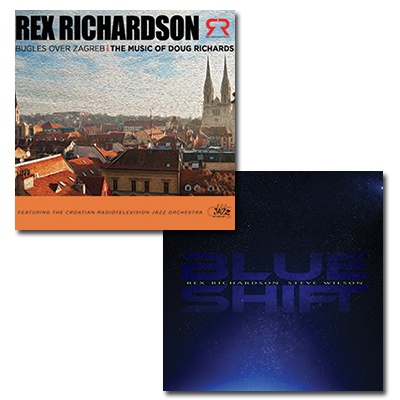 BUGLES OVER ZAGREB is available now on RexRichardson.net and CD Baby and will soon be available on Amazon and iTunes.

BLUE SHIFT is available on Amazon and SummitRecords.com.

Richardson will appear on “Virginia This Morning” October 21st and celebrate with a dual album release event at The Broadberry in Richmond October 22nd.

Both instrumental albums highlight Richardson’s personal style, which combines a singular virtuosity with an endlessly inventive approach to improvisation. These releases solidify his status as a world-class trumpet player. Embodying both jazz cool and masterful range, he is an accessible artist and educator who will foster the genre for many years to come.

BUGLES OVER ZAGREB is inspired by a spectrum of musical characteristics from across the globe and recorded live at Croatian Radiotelevision studio Bajsić, the album is composed and conducted by Grammy-nominated Doug Richards; one of the most innovative composers of symphonic jazz today. The first half of the album presents the “INTERCONTINENTAL CONCERTO FOR TRUMPET AND JAZZ ORCHESTRA” and the second half is entitled “DUKAL BUGLES,” written as a tribute to Duke Ellington’s best-known trumpet stars, consists of five sections (tracks) unfolding into one continuous movement. The result is an epic, globe trekking treasure highlighting two American jazz masters at work.

BLUE SHIFT is what happens when two world-class jazz musicians, Rex Richardson (trumpet) and Steve Wilson (saxophone), put together a modern jazz quintet with broad influences – ranging from the post-bop shades of Woody Shaw to the country-western inflections of Bill Frisell. BLUE SHIFT’s compositions epitomize the eclecticism of modern jazz, a contemporary shift where bebop and jazz-rock meet. Included in the lineup are Trey Pollard (guitar), Randall Pharr (bass) and Brian Jones (drums).

The International Trumpet Guild says, “Rex Richardson is among the very best trumpet soloists in the world today!” Style Weekly called him, “One of the world’s most engaging and astonishingly versatile trumpeters.” Richardson has performed in critically acclaimed ensembles and orchestras on five continents and shared the stage with countless legendary artists. He has taught at Virginia Commonwealth University since 2002 and served as artist-in-residence or visiting professor at colleges from New York to London. He was awarded the 2011 Theresa Pollack Prize for Excellence in the Arts and named the 2008 Brass Herald Personality of the Year. Yamaha has endorsed him since 1995.