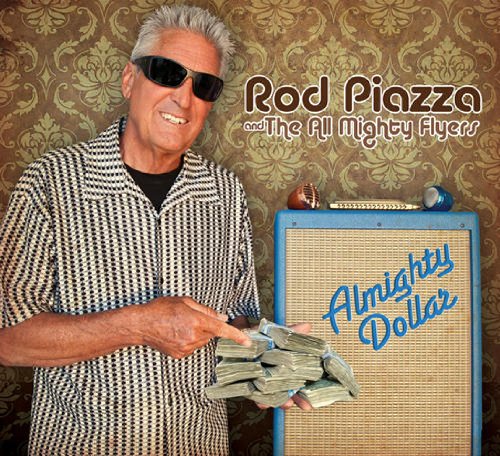 “Piazza is a superior diatonic and chromatic harmonica player with style – the elusive quality that combines confidence, presence, control, risk-taking and instinct.” – Down Beat Magazine

“Piazza adds West coast swing and sophistication to traditional Chicago electric roots and the results are right up there with the best of Paul Butterfield or Kim Wilson.” – Blues Matters

“Rod Piazza lights up a blue note 40 years in the making each time he draws and blows through the reeds. Some are sweet, others wail like a train a-comin’. And when he sings, Piazza’s full of tuneful authority.” – Blues Revue

Rod Piazza has long been recognized for his dedication and commitment to excellence in blues – even more notably for his skill and expertise at wielding the harmonica – as evidenced by the many awards and accolades he and his band have attained over the years. He began the latest phase of his career in 2005, when the Mighty Flyers signed on with the Los Angeles based Delta Groove Music. His first release for the label was the ambitious CD/DVD combo “For The Chosen Who,” featuring special guests Finis Tasby, Johnny Dyer, Kid Ramos, Randy Chortkoff, James Gadson, as well as Buddy Guy’s brother, the late Phil Guy. The album elicited terrific reviews from fans and critics alike and the following year The Mighty Flyers received their fourth Blues Music Award for “Band of the Year.”

Piazza simplified his approach over the course of his next two projects. “ThrillVille” in ’07 and “Soul Monster” in ’09, found him working within the context of his newly rechristened Mighty Flyers Blues Quartet and carrying forth the tradition of the Flyers’ rousing blend of West Coast Swing, Boogie-Woogie, R&B and Chicago Blues. Piazza continued to lay down proof that he was a serious contender for the harmonica throne and, Honey Piazza, after receiving eleven Blues Music Award nominations, finally took home the trophy in 2008 for the Pinetop Perkins Piano Player of the Year Award. In 2011, the Bay Area Blues Society presented two awards to the band in the West Coast Blues Hall of Fame – “Harmonica Player of the Year” for Rod Piazza and “Keyboard Player of the Year” for Honey Piazza.

“Almighty Dollar” heralds Rod Piazza’s latest achievement in a career that spans well over four decades and twenty-five recordings. This time out, the Mighty Flyers rocket into the stratosphere as Piazza pilots his crew through another harp-fueled voyage propelled by some very special guests including Bay Area guitarist Rusty Zinn, Mississippi-bred bluesman Johnny Dyer, So Cal bassists Hank Van Sickle on upright and Norm Gonzalez on electric bass, along with saxophonist Jonny Viau from San Diego. In these tough economic times the power of the almighty dollar may not be what it used to be… but in the hands of Rod Piazza and the All Mighty Flyers you can rest assured that their music retains a value that is unequivocally built to last.