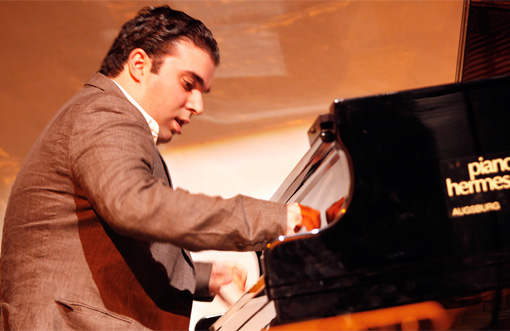 Breaking into the music scene only a few years ago, pianist Roy Assaf has already earned acclaim from jazz masters Kenny Barron and Jason Moran. With appearances on 20 albums as a sideman and co-leader, Roy’s first album as a leader—titled “Respect” and being released on Jazz Legacy Productions—includes such remarkable players as Reuben Rogers on bass, Greg Hutchinson on drums and special guests Roy Hargrove on trumpet and Eric Alexander on saxophone.

Roy arrived in New York in the Autumn of 2005 with a dream of pursuing his musical career. Shortly after that, he was invited to join the Dizzy Gillespie All Star Band on piano for an extended European tour consisting of 13 cities, as well as additional performances in Canada, Puerto Rico, and one week at the famed Blue Note in New York City. Since that time, he has been steadily working both with small groups as well as big bands in various venues and festivals around the world. In accompanying these famous groups, Roy has had the honor of sharing the stage with such jazz legends as Jimmy Heath, James Moody, Slide Hampton, Roy Hargrove, Antonio Hart and many more.

“Roy Assaf is not only a fine musician, he is a fine young man. Anyone would be happy to have him in their band. He is a tremendous asset to any musical experience”
(James Moody)

“Roy Assaf is an amazing pianist – you will definitely be learning a lot of good things about him.”
(Kenny Barron)

“Roy Assaf marries tradition, both American and Israeli, into a new form of jazz. This type of culturally relevant music is vital for the future of jazz. I am certain that his musical contribution will earn many followers.”
(Jason Moran)