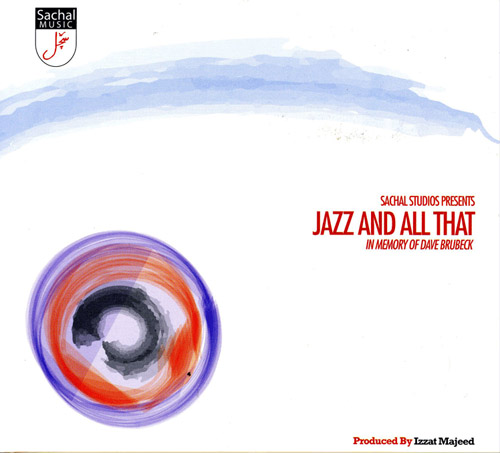 “Listening to this exotic version of “Take Five” brings back wonderful memories of Pakistan where my Quartet played in 1958. East is East, and West is West, but through music the twain meet. Congratulations!”

“This is most interesting and different recording of “Take Five” I’ve ever heard.
—Dave Brubeck

Live Appearance
New York, NY – November 22nd, 2013
The Jazz at Lincoln Center Orchestra with Wynton Marsalis collaborates with the Sachal Jazz Ensemble, master musicians from Pakistan who incorporate ancient instruments, such as sitar, sarod, tabla, and dholak into the sounds and rhythms of iconic jazz repertoire. This collaboration is JALC’s latest installment in a string of cross-cultural investigations, which have paired the JLCO with musicians from Ghana and Spain, among others, as the organization actualizes its mission to make jazz available globally by interfacing the sounds of jazz, grounded firmly in American values of blues and swing expression, with an international array of musical languages and configurations. 2012 Oscar-winning director Sharmeen Obaid Chinoy is currently filming this remarkable ensemble for a documentary that will be released in 2014, which will conclude with the Sachal Jazz Ensemble’s highly anticipated collaboration with the JLCO.

The track is intended as homage to the genius of Stevie Wonder.  This version creates fresh sounds of the flute, sitar, harmonica and piano. Balu Khan’s tabla and rhythm further enhance the uniqueness of the arrangement with the string section bringing a swing to the track.  Ever since I heard this song in the early 19702, I remained glued to Stevie Wonder’s heart aching melody and Quincy Jones’ arrangement soon after.  I have arranged it with both masters in mind.

The arrangement is based on the flute that carries the sadness of the song.  Yet as the sarangi swells along with the orchestra there comes the promise of hope.  I always remember when I first heard Shirley Horn’s version and she has inspired me to make this track.

The origins of this track may well be inspired by the U.S. State of Vermont, but in the arrangement of this well loved song I call it the Moonlight in Lahore!

Monsoon is based on the classical music of South Asia.  It is inspired by raga Shankara.  All of us who made this album are deeply saddened at the death of Derek Watkins who was a great musician (trumpet, flugel) and a mentor to me.  Sachal Studios dedicates this composition in his memory.

Need on say more?  At the first notes of this track the audience cheered when the Sachal Studios Orchestra played it at the Alchemy Festival (Queen Elizabeth Hall, London, April 2012.

Ponteio’s structure sounds close to the traditional music and songs of the Punjab.  The harmonica plays a wonderful reminiscence of Toots Thielemans in his collaboration with Edu Lobo.

An ode to loneliness.  The beauty of the arrangement is the minimal instrumentation.  It is a new take on an evergreen classic.  I was thrilled with the vigour with which the Sachal Orchestra played the original song.  The chorus is singing the ‘sargam’ known in the West as solfège (sol-fa in English).

A masterpiece of music.  Dave Brubeck went round the world to listen to all forms of music in different cultures and come back with global rhythms which he used uniquely to give jazz a new world.  His compositions will be eternal jazz.  Dave Brubeck was pleased with Sachal Studios’ ‘Take Five’ and sent his congratulations when it topped the charts globally.

It is composed in Kafi Thaat and carries a mix of ragas just like the five rivers of the Punjab (which translates as “Five” and “Rivers”).  A Thaat is a musical scale, conceived of as a Western musical scale might be, with the seven notes presented in their order of ascent (arohan).

Sad, full of pathos, about us, not always able to deal with hurt.  The chant “Ya Rab” means O Lord.

The arrangement of this track combines the subtle beauty of Bossa Nova with an eastern interpretation that is fresh and unique.  The flute balanced with the guitar, harmonica and piano provide a sensuousness and charm that is enhanced by the string section and the Brazilian-tinged percussion accompaniment. Antonio Carlos Jobim’s most successful album brought global success to his Bossa Nova.  Oscar Peterson’s mesmerizing interpretation and Frank Sinatra’s rendition is amazing.

The sitar is a magical tribute to Pat Metheny’s guitar.  The strings of Sachal Studios are full of life.

A tune composed in the Scottish Highlands became a hymn and Cat Stevens helped it to become popular.  The sarangi, sarod and the flute make it a universal hymn.