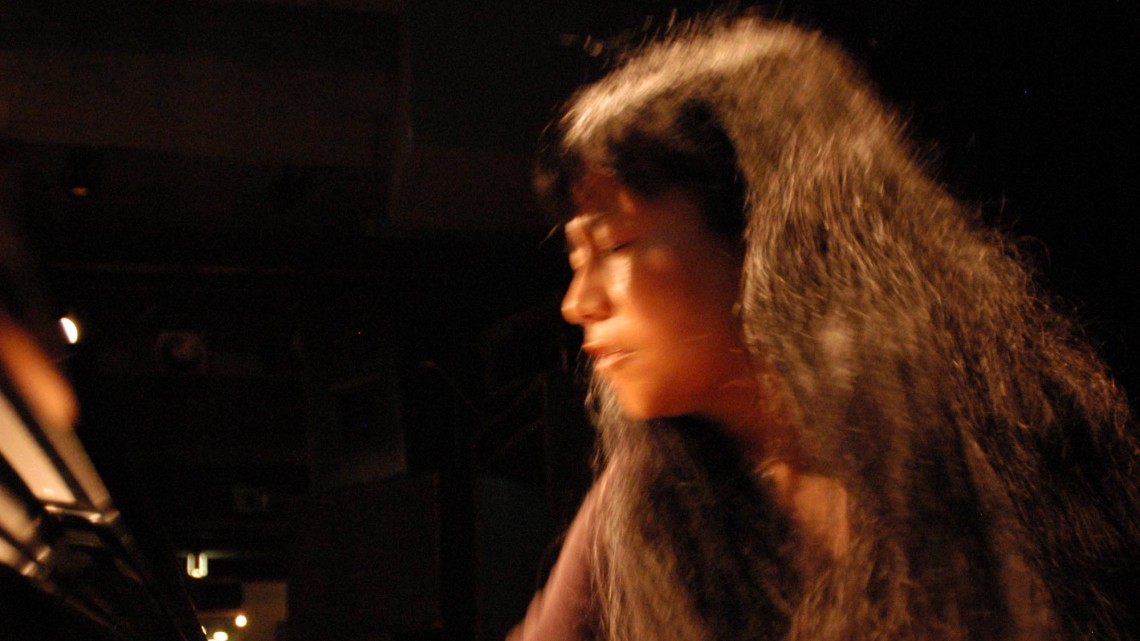 Two-trumpet ensemble Kaze unleashes storm of inventive sound with performances in Australia and Japan including Sydney, Melbourne, Kobe and Tokyo

“…the rarely heard sound of two trumpets collaborating, interweaving and cross-talking is at the center of the group Kaze, whose penultimate set of the festival was also one of the high points of the overall program.” – Josef Woodard, DownBeat

“… one of the most musically dynamic and intense “jazz” sets of the year… If you think you can imagine what piano, drums, and two trumpets will sound like, think again.” — Derk Richardson, KPFA

“One of the best gigs I’ve seen this year….” – Steve Dalachinsky, The Brooklyn Rail

Acclaimed pianist/composer Satoko Fujii — one of the most compelling voices in music today — tours Australia, January 13 – 19, 2016 and Japan, January 23 – 30, with a solo/duo performance as well as performances with the renowned collective quartet Kaze, which is touring to celebrate their recent CD Uminari.

Melodic, abstract, mysterious, beautiful, and confrontational, Kaze plays free jazz at its most creative and powerful. The members of this international quartet – pianist Fujii, trumpeters Natsuki Tamura and Christian Pruvost, and drummer Peter Orins – share an insatiable appetite for sonic experimentation, boundless energy and enthusiasm, and the disciplined intelligence of accomplished spontaneous composers.

The group has released three acclaimed recordings – 2011’s Rafale, 2013’s Tornado, and the May 2015 release Uminari which the London Jazz News calls “…bold, uncompromising music.” Uminari is a Japanese word that refers to a sound rising from the sea, a low-frequency roar that portends a coming storm or tsunami. The two-horn quartet is equally adept at the calm and the storm, with expressive subtleties giving way to overwhelming torrents of sound.

“Alternately brash or meditative, Kaze is one of the hippest projects yet from Fujii…Fujii underlines that Kaze is a democratic collective originally instigated by Orins, but her wider reputation as a stunning pianist, prolific composer and veteran bandleader has been a key draw for jazz fans since the group formed in 2010. On their latest disc, Uminari (or Sea Of Sound), the adventurous band can swerve from swinging, tuneful inside jazz to outside, spontaneous improvisations in a single track.” – Roger Levesque, Edmonton Journal

“Each one of Kaze’s releases has been uniquely filmic and expressionistic and Uminari is no exception. The seamless and exquisite camaraderie among the ensemble members make it cohesive and imaginative while brimming with spontaneity…Satoko Fujii once again proves that she is one of the most brilliant, compelling and intelligent voices in modern music.” – Hrayr Attarian, All About Jazz

“The title is a Japanese word which depicts a low frequency sound from the sea that presages a storm, and it’s an appropriate name for this disc of bold, uncompromising music.” – Peter Jones, London Jazz News

“4.5 stars. This is music which is meant to be experienced rather than merely listened to, with time and space being changed for its duration, if not after.” – Budd Kopmann, All About Jazz

“If you’re a fan of the free, this is a home.” – George Harris, Jazz Weekly

One of the most original and wide-ranging voices in modern jazz, Satoko Fujii has documented her abilities on more than 70 CDs in less than 20 years. The Tokyo native relocated to the U.S. to study at Berklee College of Music and New England Conservatory, where she was mentored by the likes of Paul Bley, Herb Pomeroy, George Russell and Cecil McBee. Through her touring and collaborations she’s truly become a citizen of the world, most recently settling in Berlin. She’s founded jazz orchestras there as well as in New York and Tokyo, Nagoya, and Kobe in Japan. Fujii has also led the quartets Ma-Do and Tobira and an avant-rock group featuring Ruins drummer Tatsuya Yoshida. In recent years she’s formed fruitful collaborations with such inventive artists as pianist Myra Melford, drummer John Hollenbeck, violinist Carla Kihlstedt, and guitarist Elliott Sharp.

Japanese trumpeter and composer Natsuki Tamura is internationally recognized for a unique vocabulary that blends extended techniques with touching jazz lyricism. This unpredictable virtuoso “has some of the stark, melancholy lyricism of Miles, the bristling rage of late 60s Freddie Hubbard and a dollop of the extended techniques,” according to Mark Keresman of JazzReview.com.

Throughout his career, Tamura has led bands with radically different approaches. Most recently, he has led First Meeting, a quartet featuring pianist Satoko Fujii, drummer Tatsuhisa Yamamoto, and electric guitarist Kelly Churko, “a noisy, free, impatient” band according to Steve Greenlee of the Boston Globe. Since 2005, Tamura has focused on the intersection of European folk music and sound abstraction with Gato Libre, a quartet featuring Fujii on accordion, Tsumura Kazuhiko on guitar, and Koreyasu Norikatsu on bass.

Orins and Pruvost are both members of the musicians’ collective, Muzzix, based in Lille, France. Orins leads Impressions, a quintet that has been described as “always on the lookout for new sounds.” The band cites Ornette Coleman, Paul Motian, Tim Berne, Steve Coleman, and Jim Black as influences, but it charts its own sound, in which “rhythm is of the essence, as well as a dynamic exchange between the band members.” Pruvost, a member of Impressions, is also a leader in his own right, and has recorded a widely praised album of solo trumpet improvisations, Ipteravox.

“For musicians getting good collaborators means a lot,” Fujii says. “It is like a getting the best friends in life.” These four best friends hold nothing back when they play.