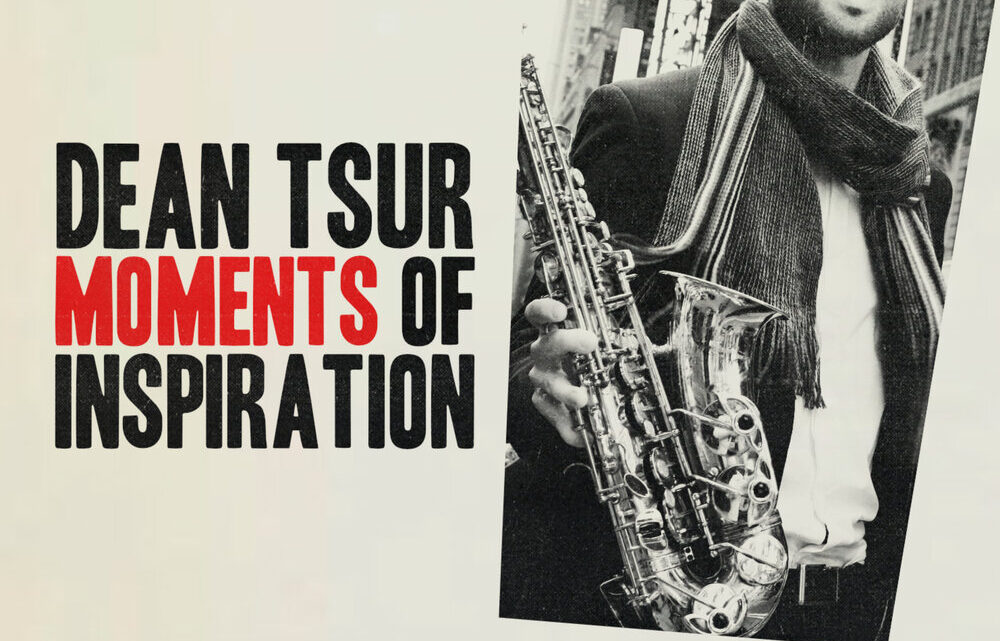 NEW YORK CITY, N.Y. – Saxophonist, composer, and Thelonious Monk Competition Semi-Finalist Dean Tsur is a musician whose career is marked by constant growth. Whether it is the shifting nature of where home is found, musical development through a flowing cast of mentors and colleagues, or introspective reflection on the music of one’s own past, Dean has looked the complexities and wonders of life in the eyes and responded with boldness and creativity.  Moments of Inspiration is a musical homage to the past seven years of Dean’s life, music, and development – a montage of people, places, and events whose inspiration and influence on Dean is irrefutable.

Dean Tsur is an artist who sees inspiration not merely as an isolated event or thing that acts as a muse for writing, but as a source from which one may draw passion and determination to create, learn, and grow. For Dean, inspiration is that energy which provides the desire to do more, find more, and be more. Moments of Inspiration reflects this idea in Dean’s life and music over the course of seven years as he looked back and curated the music of moments that shaped and carved him into the musician he is today. “I picked with seven years of perspective the musical moments that connect to moments and periods of my life that have been especially meaningful for me,” Dean says. “These are tracks that I personally like to listen to, even with the perspective of the years.” Moments of Inspiration is described by Dean as a “road album,” and functions as a snapshot into the musical biography of the artist, incorporating different bands, phases of life, and even musical preferences as Dean developed his identity and sound.

The nature of this album, with its varied personnel and recording dates, is something that, while perhaps uncommon, creates a greater sense of holistic authenticity and builds a more accurate portrait of Dean as an artist. “For me,” Dean confesses, “an album that has one band and one surrounding doesn’t reflect my personality because I moved between many different locations in my life, and variety is something that reflects my approach to music and to life.” Moreover, by including such a wide range of personnel, Dean was able not only to illustrate his creative path via his musical choices, but directly involve and incorporate the musical contributions of artists who helped mold him into the creative force he is today.

Much of the importance of tracks on Moments of Inspiration is derived from the personnel who contributed to each track. The opening song, I’ll Be with You in Apple Blossom Time, is one such example. The track itself to Dean represents achieving a dream – studying at Juilliard – and the magnitude of this elation is amplified by the band on it: three fellow musicians from his time at Julliard with whom he formed a lasting musical bond. The tracks You Don’t Know Me, Two for the Road, and Harmony 4 carry a similar emotional significance as they represent the power and gravity carried by the concept of home – which for Dean is Israel. These tracks were recorded in Israel, with Israeli musicians, including two of Dean’s childhood friends and long-time collaborators, Noam Israeli and Alon Tayar. “This recording date was sort of a reunion for us,” Dean recalls. “The ensemble’s playing made me feel at home.” Additionally, these songs were his submissions for the Thelonious Monk Competition that ultimately led him to place as a semi-finalist. “These recordings,” Dean tells, “symbolize for me the power and the mental strength that one gets from home.” Harmony 4 takes this concept of the magnitude of home and takes it forward. Dean composed it shortly after he first moved to the United States and found himself missing Israel. The emotion and the culture to which his longing is tied are both reflected in the melody. Moreover, this song was developed through collaboration, as Dean brought it in its earlier stages to his mentor, pianist Vadim Neselovskyi who proceeded to improvise melodic lines over it. Dean traces one part of the melody directly back to Vadim’s improvisation. “It adds to the richness of the composition,” Dean says, “that there is more than one person involved in the writing.”

Part of the beauty of Moments of Inspiration is the rotating cast of musicians present and the way Dean’s interactions change and evolve with each iteration of the ensemble. When asked what he loves about these artists, Dean’s appreciation becomes apparent as his admiration flows forth. “Russell Hall… [has] been a main musician and member of my ensembles in recent years,” Dean says.  “I’ve learned a lot from his spontaneous approach to music, the enormous amount of energy that he brings to the music, and the way he directs the band with his playing.” Amongst others on the album is pianist Jack Glottman, whose friendship to Dean is strong and represents an opportunity – and link to jazz lineage – they both shared. “I got to play with [Jack] in Billy Kaye’s Quartet, which was a very meaningful experience for me,” Dean recounts. “Billy Kaye symbolizes for me a connection to the jazz tradition through playing with such a legendary drummer who has toured with Thelonious Monk.” Dean highlights drummer Charles Goold’s contributions to the album as exceeding mere performance. “Once [Charles] heard me practicing the melody [to Centerpiece] by myself,” Dean says. “He was the one that suggested that I start the recording playing the melody unaccompanied.”

Moments of Inspiration is more than an album: it is a time-lapsed vignette of the life of a masterful artist. With Moments of Inspiration, Dean summarizes seven years into sixty plus minutes in a way that does not compromise the integrity of his music or identity, but creates an audible timeline in which growth, development, and immersion may be traced. Dean’s journey is marked by emotion, determination, and the shared universal experience of forward motion that is irrevocably human.

Moments of Inspiration releases on Outside in Music on November 6th, 2020.

Dean Tsur is an award-winning saxophonist, composer, and bandleader originally from Israel and based out of New York. Dean is a semi-finalist in the Thelonious Monk Competition and winner of the North American Saxophone Alliance Competition and Carinthian International Jazz Award. Dean has performed with GRAMMY winners Roy Hargrove and Wynton Marsalis, and has played at iconic venues including Dizzy’s Jazz Club, Minton’s Playhouse, and Smalls, amongst others. Dean has toured Europe, Asia, and America and has performed at various festivals including the James Moody Jazz Festival, Caramoor Jazz Festival, and Tel Aviv Jazz Festival, amongst others. As an educator, Dean has taught at Juilliard MAP, adjudicated saxophone competitions, and led various masterclasses. Dean’s work has been featured by various companies on television, radio, and in the press, ranging from Israel Channel 10 to The New York Times.

Previous post Saxophonist and composer Andrew Gutauskas with his sophomore album, “Look Out!”