Seeing It His Way: The Gerald Cleaver Interview 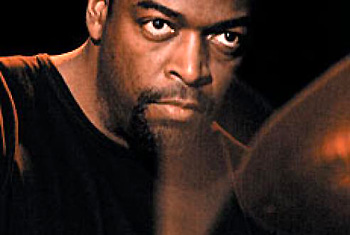 On Be It As I See It, drummer Gerald Cleaver casts his creative gaze on a seminal moment in 20th century African-American history: The Great Migration from the agrarian South to the industrial, frigid North. Released on the FSNT label, the recording showcases Cleaver’s captivating aggregation, Uncle June.

The CD is dedicated to Sun Ra and to Cleaver’s jazz drumming father, John Cleaver. Spoken word, electronica, the blues, and a classical chamber element, are all underpinned by myriad drum patterns executed with persuasive panache.

Gerald Cleaver was born in the Motor City in 1963. Raised in a music-filled home, he played drums and violin at an early age before taking up the trumpet in high school. The drums proved in the end to be more alluring. An NEA Fellowship enabled him to study with Victor Lewis, a stint that he undertook while completing a Bachelors degree in music at the University of Michigan.

Cleaver subsequently taught at both the University of Michigan, and Michigan State University before relocating to New York City in 2002. He has performed and recorded with a host of jazz greats including Roscoe Mitchell, William Parker, Henry Threadgill, Joe Morris, Hank Jones, Tommy Flanagan and Ralph Alessi.

Gerald touches on several aspects of his music and influences in the following interview.

John Stevenson: The overarching concept behind the CD is the Great Migration from the South; the migration of your own family to Detroit is placed in this context. Against the background of present-day controversies regarding migration, especially the vexed issue of Mexican immigration, do you think the recording takes on a more urgent dimension?

Gerald Cleaver: I’m not trying to establish a political position. This record, as a whole, is a look back and a look forward from my perspective. There’s a small photo on the back cover of a pair on a southern rural road; they’re taking a journey. I don’t know if they’re returning home from the general store, or heading up north. What I see is two people on foot on a road. And I can’t see the end of that road. I’m intrigued by that. Ever been on the highway, moving along and then look up and wonder who these hundreds, thousands of fellow travellers are, moving in the same or the opposite direction? And where are they going? The record is like a ripple in a pond. The huge sociological event we call the Great Migration is still in process. I’m hoping to give listeners a window into how I feel about it.

JS: Be It As I See It is a unique jazz narrative, dedication and collage rolled into one. The instrumentation on the recording is striking: drumset, keyboards/piano, banjo, viola, saxes, winds, reeds and spoken word. How did you come to decide on this specific palette of sonic colours to tell your story?

GC: I realized a long time ago that most of the music I’ve written has a chamber-esque quality to it. I became enamoured with a strings/winds/percussion blend in my early teens, as I started discovering classical music. A small chamber group with just a few strings, minimal reeds, say, flute, clarinet, English horn, plus trumpet, horn, trombone and percussion is such an exciting, powerful, but mobile sound. I love the timbral possibilities of various instruments and the orchestration possibilities of certain combinations. Everyone in the band is attracted to these things. We have a love for discovering the endless possibilities of sound on our instruments. We all were doing that long before we met each other. So, I came to this particular instrumentation knowing that the way they play would help me to discover the music I wrote for them. A little circular, but that’s really how it is. Like the declaration that starts the record: To love is to be loved.

JS: The jarring, fully plugged-in buzz on the opening number is reminiscent of Jimi Hendrix’s music; you can’t miss the expansive orchestral Sun-Ra-esque swoosh of sound on some numbers; and Craig Taborn’s keyboard vamps in places lend a 1980s jazz-fusion aspect; a few post-bop influences in other places. The Blues, however, remains a powerful constant in the whole equation. Does this point to the eclecticism of your own musical experiences growing up in Detroit?

GC: Generally, each one of us in the band has similarly eclectic musical curiosities. I wouldn’t say it’s geographic. It has more to do with the musical atmosphere of our formative years. We discovered those, and more, great influences, through free-form radio, record stores, public libraries, friends, family, even by accident. The radio and record store resource is particularly important to me (and I’d imagine to the band, as well). I’m still making the musical connections, albeit aided by algorhythms, these days. I miss the walk-in, get-lost-for-hours wonder of a great record store. What I do love about Detroit is the feeling of absolute freedom to do what you want. Take a band like Death. These young guys from Detroit, who in the early 1970’s were doing some really imaginative, innovative rock music, remained ‘undiscovered’ until a couple years ago. As one article claims, they were punk before punk was punk. I existed in an amazing creative cocoon in Detroit.

JS: Who have been your major influences as a drummer?

GC: I thought about your question years ago, trying to make the same assessment for myself. Tony Williams, Jack DeJohnette, John Bonham, Elvin Jones, Art Blakey, Philly Joe Jones, Paul Motian, Roy Haynes and really, tens more. I have to mention the late great Roy Brooks, Lawrence Williams, George Goldsmith and Rich ‘Pistol’ Allen (of Motown fame) as four who I knew personally and were really encouraging to me, coming up. They’re the focus of dedication, along with my hometown, on my previous release, ‘Gerald Cleaver’s Detroit’. But maybe in terms of the most serious influence without even trying (him or I): My father, John Cleaver. He’s the coolest influence, because he is a great example of being grounded, yet keeping his ears and eyes open. Here are two great examples of that. He’s of the straight-up, post-bop generation: Played with Joe Henderson and Yusef Lateef, among others, when they were still in Detroit. But when he discovered I was into the Beatles, he didn’t rail, he went out and bought every one of their albums that he could find for me. The second: He is casually listening to music in the basement. Then he puts on John Coltrane’s ‘Cosmic Music’. He obviously saw the look of “WTF?!?” on my face and just started chuckling. It’s nice that I’ve come full-circle: I make a living playing that “WTF?!?” music now. Ha!

JS: What are your thoughts on the use of spoken word in jazz? Is it just a medium? Or is it the message itself? Can too much spoken word get in the way?

GC: I guess you’d have to give me an example of what you thought is too much. There are a few that I love that come directly to mind: The track “Words” from the album ‘Roscoe Mitchell and The Sound and Space Ensembles’; Max Roach playing along to Rev. Dr. Martin Luther King’s, “I Have A Dream” (Chattahochee Red); countless Sun Ra speech-sing-chants; Charles Mingus tearing-down the fourth wall in his live performance (“Is it a concert or a workshop or a rehearsal or a rant?”), or great songs like “Original Faubus Fables”; Cecil Taylor’s recitations of his great poetry. For me, the declamations take on very different meanings, given the context. I first started vocalizing in trio with Lotte Anker and Craig Taborn around 2003. That association is so safe and inspiring that it brings out the latent performance-art tendencies in me. I’ve continued to do it in other contexts, increasingly, over the years. If the question, “What does this mean?”, has to arise in the listener’s mind, I feel that it has done its job.

JS: How did you come to put Uncle June together?

GC: The initial idea included Charles Gayle, Craig Taborn and Mat Maneri. We did our first gig at Barbès, in Brooklyn in 2004. After that, Charles graciously bowed out. I immediately thought of Tony Malaby, which took it in a different but similar direction. Andrew Bishop, who I jokingly refer to as, “My secret weapon” joined the band sometime later. Andrew, in particular, allows me to express my expanded orchestrational intentions because he’s so adept and personal on a variety of reeds: flute, clarinet, bass clarinet, soprano and tenor saxophone (and doesn’t mind bring them ALL to the gig). He jokes that he’s wood-shedding on baritone sax getting ready for me ask for it.

JS: You have dedicated Be It As I See It to Sun Ra, and to your father. Do you think the music, legacy and indeed mission of Sun Ra and the Arkestra have been properly understood by Americans? What advice did your father pass on to you as a drummer’s son?

GC: Certainly, Sun Ra’s genius has been misunderstood by most. Most can’t get past the surface of the costumes and space-talk. There are so many things to appreciate about the man. He was a prolific composer and a gifted and sought-after arranger. He was a great pianist and one who was innovative in his use of electronics. He was a scholar. He is to be congratulated for keeping a big band on the road longer, I believe, than any other big band leader. I love how he constantly communicated the concept of higher level of unity, it’s not about the racial, cultural, nationalistic, or even global identity, really. When you release those types of division, I believe you can really appreciate your particular heritage even more fully than if you resist dissolving into the so-called melting pot. The life message I glean from my father: Remain true to yourself and be aggressively inquisitive. To paraphrase both my Mom and Dad in one of their little gems of advice: You are in your right place. It might be where you want to be, but it’s where you’re supposed to be. That’s endlessly optimistic. We think ourselves into our “right” place. If it’s positive and productive, it’ll manifest itself. If not, well …

JS: Given the cross-roads reached by the recording industry and the rise of the internet, do you see a future for the kind of music that you play?

GC: I couldn’t be more optimistic. Music has a mission other than being the means to win a Grammy, know what I mean?

JS: Beside its Motown label music legacy, do many people outside the US know of the Motor City’s legacy as far as jazz and improvised music is concerned?

GC: I think Detroit’s legacy in music in general (Blues, Jazz, Motown, Rock, Techno, Gospel) is very well known around the globe. The legacy I inherited is alive and well, still producing bountifully.

Next post Laila Biali heads on tour with Tracing Light