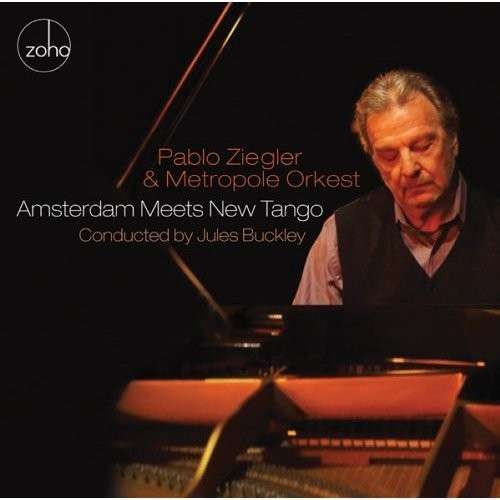 ZIEGLER, Composer/Pianist/Arranger who toured with the great Argentinian musician Astor Piazzolla for years, brings his prowess behind the piano and his compositional talent to this most interesting ensemble, a program mix of Piazzolla and Ziegler.

Mr. Ziegler is the greatest living exponent of Nuevo.  Says All About Jazz, Ziegler “brings a sense of passion and surprise to every one of his solos.”  His just released CD with the Metropole Orkest of Amsterdam has been receiving raves from all the critics with Critical Jazz calling it  “an inspiring release proving that the brilliance of New Tango did not die with Astor Piazzolla but instead has been reinvented under the skillful hands of the great Pablo Ziegler.”

The music will swing left and right with Maestro Ziegler’s majestic flair dazzling audiences on piano in the center of it all.  Special arrangements have been written for cello taking the music into a breathtaking arena of ‘Tango Meets Classical” with sensual rhythms and then making a right turn as Stefon Harris takes the stage and improvises upon Ziegler’s charts taking Tango sounds deep into Jazz and all the excitement that brings.

The survival of a musical genre is the result of artistic evolution, passed through generations of musicians, largely through the roles mentor and student.  There’s always a key figure that puts together the disparate cultural pieces that form an inspirational spark.  These folks generally gather some attention, and they require musicians to support their concept through live performance.  The musicians that they hire get that first hand experience of learning the foundation of this new style from its creator, and often times, they even see it evolve through the years.  On a rare occasion, a special kind of musician gets hired; this type of musician will dedicate themselves fully to the new style and stay with the master as long as possible.  More importantly, they’ll continue performing this music long after their time with their mentor and they’ll eventually become responsible for taking the music to a new generation.

Pianist Pablo Ziegler has taken on the duty of carrying the art of nuevo tango onto the next generation, continuing the musical tradition begun by his mentor, Astor Piazzolla.    Raised in Buenos Aires, he studied classical piano intensely, stretching his interests into the world of jazz as he hit his teen years.  These two realms made up his musical life for much of his time in Argentina, as he performed with his own groups, and wrote music for stage and television.  In 1978, he hit a major turning point in his musical evolution when he joined Astor Piazzolla’s quintet and became a major player in nuevo tango.  He stayed with Piazzolla for eleven years, until the well known composer ended his quintet due to health issues.  Hitting a major crossroads in his career, Ziegler could have gone in any musical direction, but he decided to stay committed to nuevo tango, the music created and made famous by Piazzolla.  Over the years, he has fronted a number of different configurations, ranging from solo concerts to quintets, including acoustic and electric groups, and even writing for orchestral groups.  One thing has remained consistent though – through the performance of original compositions and Piazzolla pieces over the long term, Ziegler has become the most important voice in modern nuevo tango.

This video comes from a performance at Birdland, featuring Ziegler performing one of Piazzolla’s classic songs, “Fuga y Misterio” with a recent group, his classical tango quartet.  This group brings a variety of sounds together, with Ziegler on piano, Hector del Curto on bandoneon, Pedro Giraudo on acoustic bass, and Sandra Luna on cello.  There’s a stately quality to the music here, that pulls together the combination of classical finesse, rich jazz harmonies, and tango rhythmic motion originally presented by Piazzolla and pushed to a new level by Ziegler.
– Chip Boaz The Latin Jazz Corner

CD Available on Amazon and ITunes