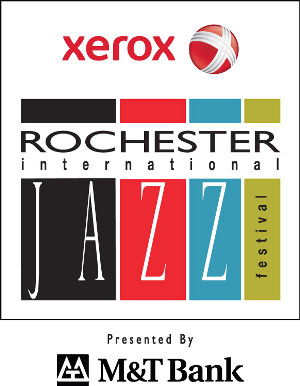 John Nugent performs with the RPO strings at Kodak Hall at Eastman Theatre as part of the Producers Performance on Sunday. / MARIE DE JESUS staff photographer

The 10th annual Xerox Rochester International Jazz Festival runs through June 18.
For headline shows at the Eastman Theatre, 60 Gibbs St., tickets are available at the festival’s Ticket Shop at the corner of East Avenue and Gibbs Street or through Ticketmaster, (800) 745-3000 or ticketmaster.com. As of late in the week, the Elvis Costello show was sold out and tickets for some of the other shows were dwindling fast.
Club passes are sold out. But tickets to individual club shows — $25 at Kilbourn Hall and $20 for the other venues — will be sold on a first-come, first-served basis at the door. These tickets are cash only and are not sold in advance.
There are also designated free outdoor stages.
For more information, go to rochesterjazz.com.

On Twitter:
Follow Jeff Spevak (@jeff spevak1) and Anna Reguero (@areguero), and add your own tweets to our live blog by adding the hashtag #roc jazz.
Enter your haiku:
Join Jeff Spevak by expressing your reactions to the fest in haikus. The best will be published. Send to cathyr @DemocratandChronicle.com with the subject line “haiku” or tweet with the #rocjazz hashtag.

Ten years after creating the monster that is the Xerox Rochester International Jazz Festival — cranking it to the ceiling until bolts of lighting from the storm brought it to life — we shouldn’t have been surprised that John Nugent needed a little peace and quiet. The event’s co-producer decided to play a show of his own marking the event’s anniversary, and the 2,500th concert he had produced by his count, orchestrating an afternoon of modesty, beauty and romantic ballads.

Sunday’s matinee in Kodak Hall at Eastman Theatre, the Producer’s Performance, was the Director’s Cut of the Nugent. We’d seen bits and pieces of this over the last decade, with his on-stage cameos and late-night jam appearances. So it should have been no surprise, especially when considering Nugent’s resumé as a tenor saxophonist, that when he’s not driving around from venue to venue on his motor scooter, and stands in one place for 70 minutes, he is a really fine tenor sax player.

“This is something I’ve wanted to do for many, many years,” he said, pointing to the formidable army of string players drafted from the Rochester Philharmonic Orchestra. He had his lieutenants, the local Eastman School of Music dynamos Bill Dobbins on piano, Jeff Campbell on bass and Mike Melito on drums.

But most of the air in the room was reserved for Nugent, who’s signing the checks. Conductor Dave Rivello, as always the ponytailed hipster academic, presented arrangements that flitted about behind Nugent like a film soundtrack.

The saxophonist leaned back in his ice-cream suit and shot long, languid, unhurried notes to the moon. Or, at least to the huge chandelier hanging from the ceiling.

The setting was subdued for the most part, although shards of aqua and turquoise cascaded across the musicians during “But Beautiful.” Many of the nine numbers, all love songs, were slightly biographical in nature, tracing moments in Nugent’s meandering career. He introduced “Estaté” by noting that he’d first heard it from the great Jon Hendricks, with a couple of sax passages approximating the great singer’s vocalese styling. For “Like Someone in Love,” he brought out his wife Dawn Thomson for a few sax-and-guitar exchanges. The first time he’d heard “Polka Dots and Moonbeams,” Dexter Gordon was playing it. He used to play “Beija Flor,” which means butterfly, with drummer Al Foster. He remembers hearing Sonny Rollins playing “Moonlight in Vermont.” In Vermont.