The Lençóis Jazz And Blues Festival 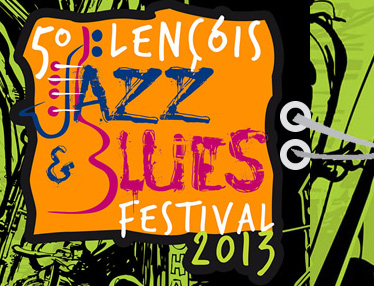 In 2013 The Lençóis Jazz and Blues Festival,with ENERGY COMPANY MARANHÃO (Cemar) sponsorship,and by Maranhão Cultural Incentive State Law, and support of Barreirinhas and São Luís city hall,of Fiema,Sebrae,Sesc,Potiguar,Eletrical Center,Tory Brindes,Mirante Tv,comes to its 5th edition. Makes history in Maranhão as the first event to join music,ecotourism and social responsibility in a single project. Over years brought to Barreirinhas and São Luís stages over a hundred great names of Brazilian and foreigner music.

With high quality artists,solid repertory and a lot of cultural diversity the event consolidated in national circuit of important gender music festivals. Also won a legion of fans. In festivals’ four editions the total public was about 10 thousand people.

The proposal of promote integration between Maranhão artists, placing them to play with consecrated Brazilian and foreigner names, has given good results. Thanks to this exchange, some local talents have been invited to play in other states and also to participate in CDs of musicians already included in the universe of Brazilian jazz and blues.

In four years the festival is also news in Maranhão and Brazil. Thanks to the visibility given to the event by the local and national press, The Lençóis Jazz and Blues Festival become a kind of São Luís and Barreirinhas, in Lençóis Maranheneses cultural and tourist showcase of beauty natural and musical richness. Contributes directly to the development of tourism and indirectly to the generation of income in the two cities. And that is because the festival generates several temporary jobs in entertainment with hiring technical light,sound,producers,stage directors and general workers,between others.

In four years of existence The Lençóis Jazz and Blues Festival has also provided access to children, adolescents, adults and elderly low-income diverse cultural contributing to the creation of new audiences. During this time more than a thousand people were also benefited by social responsibility. Prominent among them, participation in free musical workshops, chat with the artists, open rehearsals and raffles of musical instruments.

To celebrate so many achievements the team of festival’s production decided to dare in 2013 and give the public of São Luís and Barreirinhas great news. This year the two editions of the festival will be held in new spaces. In Barreirinhas the concerts will be performed on days August 2,3 and 4,at Beira Rio Avenue. In São Luís the venue of the event will be the Praça Maria Aragão on Beira Mar Avenue.

The concerts in the two cities will also be open to the public, thanks to the benefit of the State Law of Culture Incentive. What enabled the sponsorship of ENERGY COMPANY MARANHÃO (CEMAR) through the Secretary of State for Culture (Secma) and Ministry of Finance (Sefaz) and by the conquest of new partners such as City Halls Barreirinhas and São Luís and of new supporters who embraced the project now in 2013. Former partners as Sebrae, SESC, Potiguar, Electric Center, Tory Brindes and TV Mirante also remain firm honoring the festival.

Programming birthday Barreirinhas and São Luís is flawless. Barreirinhas, on Friday (2/8), will present Trio Veredas, Márcio Glam e Banda, Carlinhos Veloz and Criolina. On Saturday (3/8) attractions are Roberto Ricci, Yamandú Costa and Igor Prado and JJ Jackson. On Sunday (4/8) presentations will double A Corda in Si from Glad to Azevedo and Babi Mendes.

In São Luís, at the Praça Maria Aragão, should present themselves on Friday (9/8) Jr. Mouriz and Edy Trombone, Group Delicatessen and Leo Gandelman with special participation of Serginho do Trombone. On Saturday (10/8) will be attractions and Ari Borger Quartet, Ellen Oléria (The Voice winner-2012/TV Globo Brazil) and Rio Jazz Orchestra and Taryn Szpilman.

For this great anniversary edition is being estimated an audience of about 7000 people in Barreirinhas and about 10 thousand people in São Luís.Is also planned to hold a procession music and environmental awareness, and Guitar Workshop (Facilitator Jair Torres), Harmonica and Violin Workshop (Junior Facilitator-Mouriz) and Construction of Musical Instruments with Recycled Materials (Facilitator-Ricardo Passos). Barreirinhas Workshops will be held at Casa do Turista. In São Luís, the venue of musical workshops will still be released and A Banda do Bom Menino (composed of about eighty children) will open the festival.

Another great new feature for this edition is a unique partnership with TAM Airlines will be the Company’s Official V Lençóis Jazz and Blues Festival 2013. What will provide all tourists from Brazil who want to attend the Festival, both in Barreirinhas (MA) and in São Luís (MA) in the period from July 30 to August 13, discounts up to 25% in the values of their tickets airlines. To benefit from this promotion interested will have to use a numeric code available on the event website www.lencoisjazzeblues.com