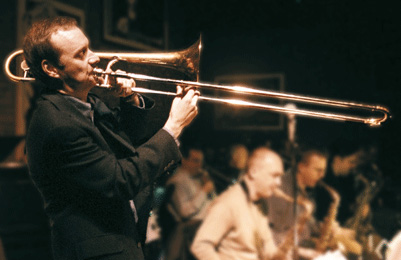 Featuring the compositions and arrangements of GRAMMY-nominated arranger, vocalist and trombonist Pete McGuinness.

After years of performing with and writing for numerous jazz big bands, Pete finally decided to realize his life-long dream and front a large jazz ensemble of his own. The Pete McGuinness Jazz Orchestra was formed in 2006 and immediately began performing in NYC area jazz clubs. It features all of the various aspects of Pete’s musicianship – as a trombonist, composer/arranger, and jazz vocalist. Pete’s music for the band is a reflection of all the many great jazz writers Pete has loved and been influenced by throughout his life, including composer/arrangers  Bill Holman, Bob Brookmeyer (a former teacher of Pete’s), and the late Thad Jones, as well as more recently established voices, such as John Fedchock and Maria Schneider, creating a sound that is uniquely his own. With a line-up of some of NYC’s very best big band players and jazz soloists, there is a variety of exciting and interesting personalities in the group which help spur Pete’s various arrangements on (see “galley” page to view photos of all of the musicians in the band). Like Pete, most of the players have spent time with many other well-known jazz big bands, including the Woody Herman Orchestra, the Lionel Hampton and Buddy Rich big bands, the Maria Schneider Jazz Orchestra, John Fedchock’s “New York Big Band”, The Vanguard Jazz Orchestra, and others. Some of the musicians, such as trumpeter Bill Mobley and pianist Mike Holober lead full jazz orchestras of there own.

In September of 2006, the band went into New York’s famous Nola recording studios to record it’s debut CD, “First Flight”. Pete was ably assisted by legendary trombonist-arranger ¬bandleader John Fedchock, who acted as session producer, and who later provided the linear notes for the finished CD.  In January 2007, the band and the CD project caught the attention of the A + R people at Summit records, and the CD was set for release. In June of 2007, “First Flight” was put out nation-wide to much critical acclaim and radio play.  In 2008, the CD earned Pete a GRAMMY nomination for his arrangement of “Smile”.  The band has since performed at such well-known NYC jazz venues as The Blue Note, The Jazz Gallery and Iridium. Pete is currently the Professor of Jazz Arranging at William Paterson University in Wayne, NJ