The Word "Jazz" Will Now Be Racist 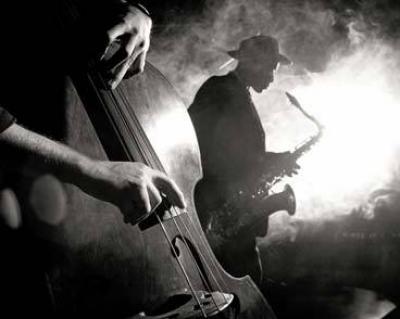 Henceforth, please refer to the genre as “Black American Music.”
By Victor Fiorillo

Last Thursday, while I rocked out in Greenwich Village to the white-people music known as Van Halen, Philadelphia-based pianist Orrin Evans–recipient of the $60,000 Pew Fellowship for the Arts–was a quick ride up the A-C-E in Hell’s Kitchen at Birdland. Note that I did not refer to Evans as “Philadelphia-based jazz pianist” as I would have in 2011. This is because Evans has decided that he no longer plays jazz. He plays Black American Music.

At Birdland, Evans sat on a prestigious panel of musicians who had congregated for the Inaugural Black American Music (or BAM) conference.

(If you’ve got an hour-and-a-half to kill, you can watch a video of the panel here.) Though he’s been far more vocal on his Facebook page, where he makes it quite clear that “`jazz’ is a perfect word for some peoples music just not mine,” he didn’t get much of a word in at Birdland, where his verbose co-panelists set the tone by comparing their business to the “plantation system” and being careful to use “the j-word” whenever they were referring to that old, racist word, jazz. They theorize that black audiences have largely turned away from the genre because of the word itself.

The whole thing started back in November, when distinguished trumpeter Nicholas Payton, also on the panel, posted a manifesto of sorts, in which he declared: “Jazz is a lie. America is a lie … Playing Jazz is like running on a treadmill: you may break a sweat, but ultimately you ain’t going nowhere. I am Nicholas Payton and I don’t play `the j word.’
I play BAM.”

Apparently, Payton didn’t make the point strongly enough in that post, so he ran a follow-up in December: “I am not dissing an art form. I am dissing the name, Jazz. Just like being called Nigger affected how Black people felt about themselves at one time, I believe the term `JAZZ’
affects the style of playing. I am not a Nigger and I am not a Jazz musician … `Jazz’ is an oppressive colonialist slave term and I want no parts of it.”

“That word [the j-word] has such a negative connotation to it,” Evans told me when I reached him on his cell this morning. “From where I’m at, the best way to say it is Black American Music. It’s the image, not the music. The name itself is limiting audiences. I understand why some of the white musicians don’t see it as an issue. That’s because when they turn to the audience, they see themselves. When a white guy walks into an all black strip club and it’s all black young people, trust me that white guy is going to feel a little different. Nobody looks like me. I’m not saying I don’t want to see y’all [white people] no more. But can we sprinkle some pepper in there?”

One veteran Philadelphia jazz musician (who is not white) sees it this way: “While I think that dialog around the issues of jazz’s legacy and jazz’s future is vital, I take issues with some of the figures involved in this most recent dust-up who, in my estimation, are mostly about creating a cult of personality and who leverage identity politics in the service of same. However, the issue is important, explosive and one that must be addressed—and to whatever degree possible, resolved—if jazz (in America—it thrives elsewhere, mostly liberated from this whole `who owns the tradition and has a right to play it’ argument) is to have anything approaching a vibrant future.”