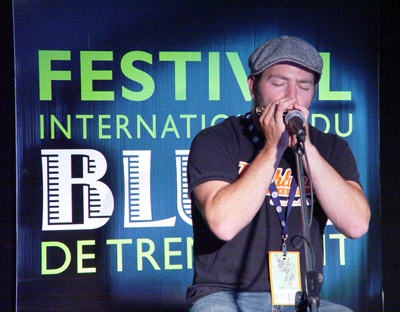 Mont-Tremblant, July 12, 2011 – Tomorrow will take place one of the most anticipated shows of the Festival
featuring none other than Zachary Richard, the event’s spokesperson for a second year in a row, who will be
singing with the talented Isabelle Boulay. The singer from Louisiana and the famous fiery hair artist will offer a
breathtaking performance where blues and country music will meet with vitality and authenticity.
Having composed some of her greatest hits like Le Banc des Délaissés and Jamais assez loin, Zachary Richard
knows and understands better than anyone Isabelle Boulay’s voice. Together on stage, these two great names
of francophone music form a perfect duo. They have already shared the stage a few times before leaving behind
a speechless audience created by the emotion spread by their voices in tandem.
At 8:30 pm, visitors will enjoy performances by Zachary Richard and Isabelle Boulay with Rosie Ledet & The
Zydeco Playboys as the opening act at 7 pm.

Tremblant’s International Blues Festival runs from July 8 to 17, 2011 and offers free performances. Over the last
18 years, this event has attracted a growing number of visitors by presenting shows from renowned international
artists who performed in the great outdoors. More than 125,000 people attended last year’s edition.

The son of Lonnie Brooks learned the ropes from a young age as he was no stranger to Chess Studios and the
popular Checkerboard Lounge where he met Muddy Waters, Buddy Guy and Koko Taylor. At 7:30 pm at Place
Saint-Bernard, he will present his hits which have a flavor of blues with a shot of modern-day rock, including his
radio hit Something’s Going Down.

The Louisiana guitarist and singer returns to Tremblant after an acclaimed performance with the Voices of the
Wetlands last year. Osborne brilliantly moves from soul-inflected acoustic to electric blues, as we can hear on
American Patchwork, his latest release. He’s composed great songs for Keb Mo’, Jonny Lang and Tim McGraw,
but will performs as a trio at Place Saint-Bernard at 9 pm.
Free exclusive perks while lodging on site

From May 21 to October 16, all guests staying on Tremblant resort this summer will benefit from free added
values included with their accommodation such as unlimited access to the gondola to enjoy the mountain top.
Free access to the Beach & Tennis Club to enjoy the warm sand and waters of Lac Tremblant is included with
lodging, from June 18 to September 5. Parc Plage, a small private beach on the shores of Lac Tremblant is also
available for free and toddlers will enjoy the Adventurer’s Club, a playground with water games at the foot of the
mountain. To offer a wider range of free activities for Tremblant guests, the Beach & Tennis option is replaced
by a game of miniature golf on Le P’tit Géant from May 21 to June 17 and September 6 to October 16. If you find
a better price than the one you have reserved with our service, we will honour that price within 48 hours
following your reservation.

Thanks to our partners
The Tremblant International Blues Festival is powered by Volkswagen Canada in collaboration with the Casino
de Mont-Tremblant. VAN HOUTTE®, SAQ, Belle Gueule beer, Ville de Mont-Tremblant, Tourisme Québec and
CIME radio are proud partners of the event.