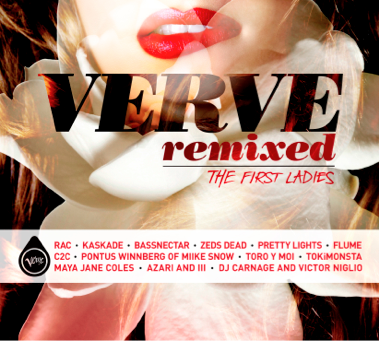 The groundbreaking Verve Remixed series is back with Verve Remixed: The First Ladies, available digitally today July 9th on Verve Records.  A physical version of the record will be released July 16th.  The all female compilation features 13 classic jazz tracks remixed by some of today’s most acclaimed DJs and producers.  Billboard has called Verve Remixed “one of the most successful brands in dance/electronic music” and it is considered by many to be the best remixed series of all time.

The album has had major buzz, with tracks premiering on Pitchfork, The Fader and Rolling Stone amongst others, with a full album premiere on USA Today.  The Fader said TOKiMONSTA “cleverly repurposes Getz’s saxophone for the remix’s hook, smoothly intertwining the two key aspects of the original” in her remix of “Corcovado” while Rolling Stone says “Kaskade wraps Gilberto’s narcotic vocals over deep, cosmic grooves that erupt into a supernova of synths” on his remix of “Fly Me To The Moon.”  Dancing Astronaut said, “Taking on the lovely Nina Simone, Bassnectar has crafted a masterful trap rendition of “Feeling Good.”

The original tracks have been remixed by 13 of the hottest producers and DJs including Zeds Dead, the Toronto based dubstep group, Kaskade, widely considered one of the most influential names in modern electronic music, critically acclaimed indie artist Toro Y Moi, electro hip-hop soul performer Pretty Lights and Bassnectar, one of the highest profile DJs in the U.S.

Verve Remixed, a compilation series created by Verve Records, brings the greatest producers and DJs today to create remixes of classic Verve jazz tracks.  The series has sold close to 1 million tracks worldwide, resonating both with fans of the original recordings and with a new untapped fanbase who are drawn to the producers showcased on the albums.