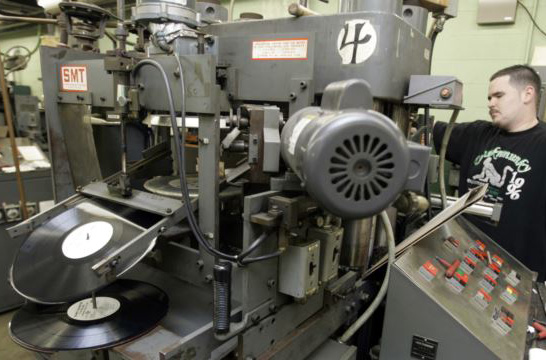 Annual sales of vinyl LPs have crossed the half a million mark for the first time in more than a decade, revealed a BPI analysis of Official Charts Company data released today.

Releases from Daft Punk, Arctic Monkeys and David Bowie have helped push the popularity of the format to renewed heights this year. Almost 550,000 LPs have been snapped up by music fans so far in 2013, already giving vinyl its most successful year since 2003.

The year-to-date sales figure reflects year-on-year growth of over 100%, doubling vinyl’s market share in the last 12 months. LPs now account for 0.8% of all albums sold in the UK – as recently as 2007, its share was just 0.1%.

Record Store Day, the one-day celebration of independent record shops which took place in April, generated £2m worth of vinyl sales itself alone. With around 15,000 LPs currently being bought every week, BPI is estimating that more than 700,000 units could be sold by the end of the year, the highest total sales since 2001, potentially generating £12 million at retail.

Whilst Daft Punk currently leads the charts for the biggest-selling LP of the year with Random Access Memories, it is Manchester’s Brit-pop pioneers, Oasis, who hold the title for the top two best-selling LPs since Official Charts records began. (What’s the Story) Morning Glory has sold more vinyl records than any other release since 1994, narrowly edging ahead of the band’s debut Definitely Maybe which takes the number two spot.

“The LP is back in the groove. We’re witnessing a renaissance for records – they’re no longer retromania and are becoming the format of choice for more and more music fans. This year has been a treat for vinyl aficionados with releases from Daft Punk, David Bowie, Arctic Monkeys and Black Sabbath.

“Whilst sales only account for a small percentage of the overall market, vinyl sales are growing fast as a new generation discovers the magic of 12 inch artwork, liner notes and the unique sound of analogue records, often accompanied by a download code for mp3s.

“As we look forward to new LPs from Arcade Fire, Paul McCartney, Pearl Jam, and Jake Bugg in the run up to Christmas, the vinyl revival looks set to continue.”

“Record Store Day has been incredibly important as a catalyst for the resurgence of vinyl. The fact that indie record shops managed to sell a huge £2m worth of vinyl in one day puts paid to the idea that either vinyl or record stores themselves are on the way out.”

New survey reveals factors behind the vinyl boom
The news coincides with new information published by the BPI which provides insight into vinyl consumers, their purchasing habits, and why the format is enjoying such a comeback.

The online poll – undertaken by 1,700 vinyl buyers throughout September – found that seven in 10 (69.9%) buy vinyl records at least once a month, with one in five (19.6%) making a vinyl purchase at least once a week. Almost nine in 10 (85.6%) respondents stated that it was their favourite music format and for almost half (47.5%) vinyl accounted for over half of their music spend.

It also appears that the appeal of vinyl isn’t just limited to those with a turntable – 3.7% of respondents said that they bought it despite not owning one. The survey also found that the typical vinyl buyer has 300 LPs in his or her collection, and 80 singles.

Record Store Day revitalises the vinyl market
The latest sales figures highlight the significance of Record Store Day, the annual celebration of independent record stores, in the resurgence of vinyl. An impressive nine out of 10 vinyl buyers said that they had heard of Record Store Day with more than half (56.5%) having visited an indie retailer on the day, which this year took place on Saturday 20th April.

The figures show that independent retailers are by far the most popular outlet for purchasing vinyl. However, a large number of physical and online retailers were named as regular shopping destinations for vinyl hunters including Amazon, eBay, record label or distributor websites, charity shops and second-hand stores – demonstrating that vinyl buyers are willing to scour a wide variety of avenues for their purchases.

Older buyers dominate but young are becoming converts
While the poll shows 35 to 44 year olds to be the largest consumer group (28.5%), younger buyers are also seeing the appeal of the format, with over a third (35.3%) aged under 35. Just under half of respondents were married, and men made up the majority of the self-selecting sample (87.4%).

The 3Ps – pressing, price and packaging – are of prime importance
The research also revealed that the primary factors considered by vinyl buffs when deciding whether to purchase LPs relate to the quality of the pressing, the price and the packaging. When quizzed further on why the format is considered superior to CD or digital music, respondents praised the enjoyment of the process of playing a record, the quality of sound and the cover art as the main reasons.

Pink Floyd’s Dark Side of the Moon voted favourite album cover
Of all the iconic cover art to be produced, Pink Floyd’s Dark Side of the Moon was voted the public’s favourite album cover with The Clash’s London Calling and The Beatles’ Sgt Pepper’s Lonely Hearts Club Band also being cited as favourite vinyl sleeves. Completing the survey, respondents crowned Pink Floyd the act which most captures the spirit of vinyl, with The Beatles, Jack White, Led Zeppelin and Neil Young among others to be cited.