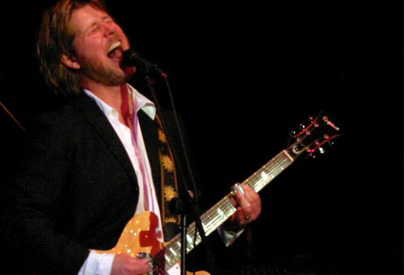 Delivering stylistic diversity in his music while infusing Rock, Blues, Pop, Funk, Folk and Jazz, Chautauqua is the much anticipated fifth studio recording from Greg Foresman.

Born in Louisville, Kentucky, Greg was focused on playing the guitar and finding like-minded people to jam and form groups with by the age of 14. Playing at back yard parties and school dances and moving into nightclubs at just 16, he started his “life on the road” at 18 years old by bringing a refreshing sound to the music industry. Keeping up with his passion, Greg soon became an in-demand touring guitarist. He has released five studio albums, including a live collection, and has had the pleasure of joining the legendary singer Martina McBride for world-wide touring gigs.

With 10 heartfelt tracks, Greg’s music has a distinct quality about it that brings people into not just the sounds, but also the feeling behind each song. His vocals have a pure harmonious vibe in “The Other Side,” while the nostalgia and romanticism really hit home in “Last Call For Arkansas.” Another gem is “Life Goes On,” where Greg touches on his Country roots.

Influenced by many iconic musicians, such as Eric Clapton, Bob Dylan, Van Morrison, and others, Greg’s music is deep-rooted with soulful pieces. The songs clearly highlight his songwriting abilities and the down-right honest nature of what he hopes to give back to his fans. Reviewing his album, Jeffery Lee Puckett of the Courier Journal (KY) states:

“Greg Foresman made his reputation long ago as a hot shot guitarist,first in Louisville as a member of Turley Richards’ band and The Hammerheads, and then in Nashville where, for seventeen years he’s been singer Martina McBride’s go to guy. Foresman’s own music has long been a classic combination of Rock, Blues and Southern Rhythm and Blues. With his fifth solo album, ‘Chautauqua,’ Foresman adds a softer element that plays on different but no less powerful emotions.”
The songwriting here is more introspective and nuanced, with an emphasis on digging deeply into lessons learned and blessings counted. There’s a clear sense that Greg is making a statement with this album, but not one overblown or swamped by pretense. It’s a sincere record, one where the songs are served by musicianship that’s been honed to an exacting degree, free of wasted energy.

With a multi-generational fan-base, Greg feels blessed with all the connections he has made and the positive impact of his music. Like any in-demand musician, he has a plan to always have his bags packed for whatever new adventure comes his way.