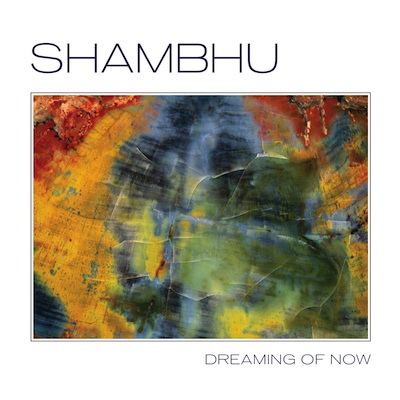 The already lauded album was recorded with a who’s who of jazz superstars and co-produced by Grammy award-winner Will Ackerman founder of Windham Hill Records, and Thomas Eaton, who was also in charge of final mixing and mastering.

Joining Shambhu on the CD are revered session players who have performed with a who’s who of artists from Sting to Pat Metheny to John McLaughlin, including Eugene Friesen on cello, Jeff Oster on flugelhorn, Charlie Bisharat on violin, Premik Russell Tubbs on wind instruments, Kai Eckhardt on bass, Frank Martin on keyboards, Celso Alberti on drums and Jeff Haynes on percussion.

‘Dreaming of Now’ has been lauded by reviewers as a “masterwork” and “one of the best albums of the year.”

Producer Will Ackerman called it “bold, assured composition and performance which unquestionably establishes Shambhu … as a force to be reckoned with.”

Reviewer Kathy Parsons wrote, “Dreaming of Now firmly establishes Shambhu as a leading guitarist and composer of the contemporary instrumental/new age music movement, and he is to be commended for creating a work of peaceful serenity mixed with a little fun.”

Shambhu exploded onto the contemporary instrumental music world in October, 2010 with his acclaimed #1 debut CD, ‘Sacred Love,’ which was quickly nominated for Best New Artist, Best Album of the Year, Best World Music CD, and Best Acoustic Instrumental. An accomplished guitarist and composer, Shambhu performs an exquisite fusion of contemporary instrumental, world, Indian and jazz styles. His technical mastery of the guitar enables delicate expressions of nuance and subtlety while engaging audiences in deep spirit. His music has been called ‘magical,’ a ‘journey’, and ‘opening a space within’.

Will Ackerman, who co-produced ‘Dreaming of Now’ in his Imaginary Road studios, has been at the forefront of the New Age music scene, having produced such artists as George Winston, Michael Hedges, Alex DeGrassi, Liz Story and countless others. Ackerman continues to inspire music’s vanguard having launched the careers of award-winning artists like Shambhu, Jeff Oster, Todd Boston, Miyako, Fiona Joy Hawkins, and countless others.

The cover of ‘Dreaming of Now’ is a remarkable image by world-renowned and critically acclaimed nature photographer Bill Atkinson.