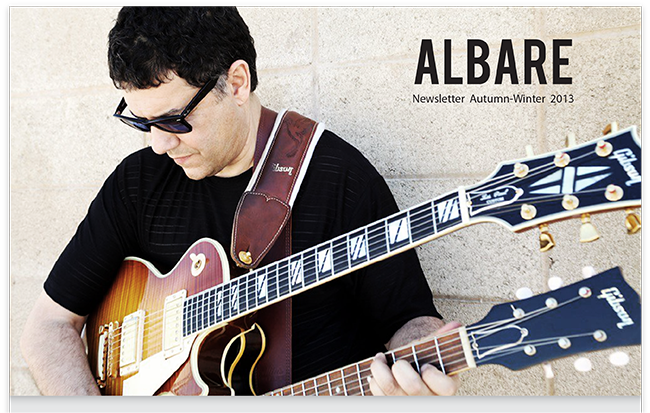 2013 has been a banner year for Australian guitarist Albare and his band. The year began in the best of places: the recording studio! “The Road Ahead” was produced in January 2013 at System Sound Recording Studios in Brooklyn, New York, with pianist Phil Turcio, bassist Yunior Terry and drummer Pablo Bencid, along with a guest vocal by Allan Harris.
Throughout the month of June Albare toured the U.S. in support of the U.S. release of the album, with stops at some of the nation’s greatest jazz clubs. The album spent 16 weeks on the U.S. Jazz Week chart! Albare’s U.S. fan base grew as the great reviews continue to come in.

What the critics are saying about ‘The Road Ahead’
“Albare’s guitar speaks volumes with its thematically lucid turns of phrase.”Scott Albin (Jazz Times)
” …..MOST HIGHLY RECOMMENDED, with an “EQ” (energy quotient) rating of 5.00… top score, ergo the “PICK” of this issue for “best guitar jazz”. RotcodZzaj (Improvijazzation Nation)
“Albare, a major guitarist from Australia, is a musician well worth discovering.” – Scott Yanow (Jazz Inside)
“…elements of the Jewish Sephardic Moroccan tradition blend with the blues tradition in a new kind of fusion.” – Jack Goodstein (Blogcritics)

For Your Consideration
As the 56th Grammy® Awards Season approaches, we invite Voting Members of The Recording Academy to consider “The Road Ahead”, which has been submitted and accepted in the following categories :
Best Jazz Instrumental Album, Best Engineered Album (Non-Classical), Best Improvised Jazz Solo, Best Instrumental Arrangement and Best Instrument Composition.