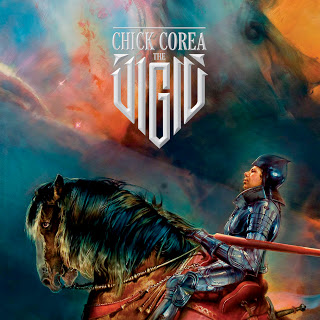 Chick Corea proves at the age of 72 that the inspirations for creativity are infinite and that the results of creative output are cumulative and still delightfully unpredictable. Like other ground-breaking jazz musicians who retain youthful wonder in real-life and imaginative joys, Corea continues to examine and explore and adapt and grow as new ideas occur to him. So now, in 2013, exactly 50 years after his start in the bands of Mongo Santamaria and Willie Bobo, Corea has formed a new band, The Vigil, to perform the ideas that emerge as he writes new music for his new album, The Vigil.

Like perhaps Miles Davis or Herbie Hancock, Corea has uncountable interests that make every album a surprise, not to mention being immensely satisfying due to the underlying technical mastery and musical quality, even when not breaking new ground. The Vigil, intended as the first of several projects for the band, draws upon Corea’s boundless imagination regarding things like stars, eternity, lances, planets, corporeal freedom, iron-clad warriors, space, spirituality and cultural vigilance. Those are weighty topics to cover in but seven tracks, but The Vigil does it through jazz allusions, the unceasing vigor of the Corea’s still-youthful wonder and the irrepressibility of his impish technique. Now recognized as one of the icons of jazz, Corea does, when he plays, overflow the expected boundaries of a piece with his synaptic charge, his characteristic scamper and his immediately recognizable whimsy. And then there is Corea’s talent for individualistic composition. (For instance, who else would have written “Spain,” which reflects Corea’s technique, contains his interest in the Spanish tinge, and engages the listener with quick mood changes?) Throughout the decades, Corea continually formed unforgettable bands of superb musicians to bring his music to life. All of these abilities come together to form The Vigil.

At first, The Vigil seems to present a stylistic theme as the first track, “Galaxy 32 Star 4,” begins with Corea’s synthesized-horn call to attention. But the album’s musical styles vary to some extent as Corea’s wife, Gayle Moran Corea, sings about being “outside of space” and Ravi Coltrane and Stanley Clarke join Corea’s “Pledge for Peace.” Eventually, it becomes apparent that Corea’s theme is more personal and universal as it addresses an age-old concern: the passing of knowledge and culture to succeeding generations. Thus, “the vigil’s” duty is to keep the music alive, as demonstrated by the thematic tracks joining Corea the jazz master with the younger musicians who understand the pure communication allowed by music. One wonders if Corea had similar understandings with Stan Getz or Miles Davis of musical vigilance and the passing of the jazz torch.

With that understanding of Corea’s theme of musical conveyance by generations, the concept of The Vigil’s tracks adheres. Most poignant and demonstrable of Corea’s sense of musical eternity is his composition, “Pledge for Peace.” The piece was written as a grand and initially solemn invocation in tribute to John Coltrane and performed appropriately by Ravi Coltrane too. Even as Corea introduces the modal prayer with extended tremolos and crescendos, and with rhythmless growing chorded intensity, interestingly, Corea’s signature style is present as he plays not in the expected rumbling bass register of the piano, as for example McCoy Tyner would, but in the middle and upper registers where most of Corea’s improvisations occurs. Stanley Clarke joins the proceedings, pulsating through the section of joy that follows with swing and the wordless communion that music provides.

Well, “Pledge for Peace” certainly differs from, say, “Portals to Forever,” offering contrasts between Corea’s acoustic piano and synthesizer skills. Even so, Corea’s punchy, gamboling style remains identifiable, and his ability to build excitement remains intact, not only because of the excellence of his bands’ musicianship and the enchanting intricacy of Corea’s writing, but also because of his ever-present exuberance.

Excellence of musicianship and exuberance must be Corea’s standards for choosing band members because those characteristics abound in The Vigil. The individual articulation is crisp and quick, as is the combined group’s. It’s appropriate that drummer Marcus Gilmore’s clicking of drumsticks is the first thing heard at the album’s start. Along with Corea, Gilmore sustains the energy of the group on every track with irrepressible support, always in the background as a force unto himself. Gilmore remains unstopping and unstoppable and unobtrusive until a closer listen reveals his own contributions to The Vigil’s character, such as his ominous build-up with bassist Hadrien Feraud to “Legacy,” not to mention their friendly ferocity that ensues. Tim Garland provides his own colors and sinuous and percolating improvisations, as well as being a reflection and elaboration for Corea’s expressed thoughts of the moment. They both wind their way in unison through the melody and then trade ideas in “Portals to Forever,” during which Garland switches to bass clarinet as a means of framing Gilmore’s extended drum solo. “Planet Chia” recalls Corea’s affinity for Latin references, this time in a meter of three, and it allows guitarist Charles Altura to add to the mood of the piece with acoustic flamenco-derived exchanges with Corea in a fast-paced flowing tempo.

The Vigil consists of various Chick Corea’s imaginative notions and stylistic characteristics that have entranced enthusiasts for half a century, all collapsed into seven tracks that still forge ahead with the experience of a matured explorer. As Corea mentions, “We’ve been doing this for a long time, just gave it a new name (for now).” Ever the adventurer while paying respect to icons like Roy Haynes and John Coltrane, Corea continues to charm with his light touch, winding compositions, one-of-a-kind musicianship and fantastical journeys of the mind as he continues to take jazz to eternity and beyond.

Next post 2013 : A Great Year For Jazz Guitarist Albare