The Basie Band Brings the Jazz! 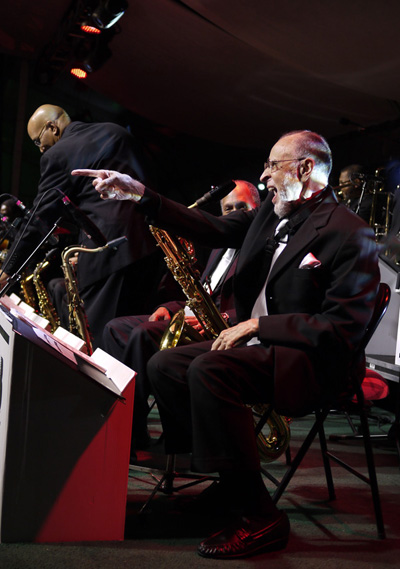 Philadelphia born Kenny Barron had a rich history spanning over 50 years to showcase his influences, exceptional musical understanding and technical ability for the close to 90-minute solo performance that he presented for the Grandmasters Series concert at the Glenn Gould Studio. When going over his biography, Barron has played and recorded with the who’s who of the jazz icons.

He opened the solo set this evening with Gershwin’s “Love Walked In,” before bringing on selections by Monk, Strayhorn and Blake. His move to New York in 1961 brought him to Brooklyn where his first gigs at a West Indian night club led him to compose “Calypso” that had the same feel as Sonny Rollins’ “St Thomas.” Barron who has a very melodic style of playing added his wonderful touch to Freddie Hubbard’s waltz “Up Jumped Spring.” For fast hands from start to finish, Barron switched to Monk’s “Well, You Needn’t.” before slowing it down considerably with his original piece “Song for Abdullah,” dedicated to Abdullah Ibrahim who used to play at the well-known Sweet Basil club in New York. That music as Barron described it was “like being in a cathedral.” Barron came back on stage at the end of the show with “Body And Soul” as a well-deserved encore.

A large crowd later gathered at the Mainstage concert for an evening of singing and and big band swinging. Canadian singer and and songwriter, Molly Johnson led the way with Robi Botos (piano), Colleen Allen (saxes and flute), Mike Downes (bass), and Ben Riley (drums). From fan-favourite “My Oh My” recorded on her self-titled debut album, Johnson brought some of her compositions as well as other jazz and blues classics such as “Killer Joe,” and “Lush Life” and even a bit of Charlie Pride in the mix. Wearing a bright red dress with a flower adorning her hair, she looked cheerful and relaxed with her musicians for whom she has great affection. Johnson also pretended that she was intimidated by the presence of the big band that was to follow. Her connection to this city is obvious when she talked about how lucky we are to live here. Performing across the street from the Royal Alexander Theatre was extra-special for her as it brought back lots of memories of her youth growing up to be the performer that she is today. She was, after all, the first Canadian female performer to sell-out a concert a few years ago for the festival.
When it comes to big bands today continuing the style and tradition of its founder, the Count Basie Orchestra will naturally be included in the list. The legendary band has been in existence for over 75 years and great musicians have assumed all of the key roles to this day. Dennis Mackrel, the orchestra’s conductor, spoke highly of Toronto and of the calibre of the local musicians that he has met on previous visits. In fact, the Canadian connection is such that Derrick Gardner, on fourth trumpet, recently accepted a position at the University of Winnipeg in Manitoba.

Starting off with Ernie Wilkin’s arrangement of “Sixteen Men Swinging,” the band played a series of pieces representing that Kansas City sound that will always be associated with the “Chairman of the Board.” Both baritone saxophonist John Williams and bassist James Leary were hired by Basie himself. Williams played beautiful low notes for a piece simply called “Carney” in tribute to Harry Carney who was part of Ellington’s band. Moving towards higher notes, first trumpet Michael P. Williams and first alto saxophonist Marshall McDonald led the way on “Things ain’t what they used to be.” Molly Johnson came back to join the band for “Gee Baby Ain’t I Good To You” popularized by Nat King Cole. Of course no Basie show would be complete without the all-time favourites such as “Lil’ Darlin’,” “Shiny Stockings,” “One O’Clock Jump,” and the finale, “April In Paris.”
It was nice to see a packed tent to see this band that played to tight perfection. Mackrel demonstrated total control such as tempering or increasing the band’s volume.

Your sleep-deprived, (barely)managing editor hit the wall on Tuesday night but can now report on a high-energy evening with back-to-back power trios. If Los Lonely Boys is a power (rock) trio then I guess you could call Bad Plus a power (jazz) trio. One who starts their set with a tune by Stravinsky. No count-in required. These guys have some kind of psychic link meanwhile Los Lonely Boys are linked by blood. It’s like they’ve been playing together their whole lives – wait a minute, they have! They’re brothers! I thought Los Lobos were going to be a bit overbearing when I heard their guitar tech doing a sound check with one guitar after another, all of them set to maximum crunch. As it turns out, they play beautifully together. They, like Average White Band, are a group I would have forgone if it had not been for meeting someone there. I’m glad I heard them because they were T-I-G-H-T. Each Los Lobos guitarist had had his own little zone in the sonic landscape and each player tries not to play the same thing someone else is playing.

Artistic Director Josh Grossman had a busy Tuesday dropping in on most of the shows, including The The Big Band Slam, an event that was initiated last year and features four Toronto-area high school big bands. He even did a little jamming at Stacie MacGregor’s after-hours jam at Quotes, and played with the always-inspirational Archie Alleyne. “One of the perks for me at this year’s festival has been hanging out a bit with Archie Alleyne. He has achieved so much during his career – as a musician, an advocate, an educator – and he seems to not be slowing down any time soon. Which is good news for us. With Kollage, Archie carries on the tradition of great bop playing, joined yesterday by Alexis Baro (trumpet), William Carn (trombone), Michael Arthurs (tenor sax), Stacie McGregor (piano) and Artie Roth. They were on fire from the get-go; Michael Arthurs is a new player for me and I especially look forward to hearing more from him.” Read more of Josh’s Blog here. Also be sure sure to check out the Artistic Director’s Guide for more comprehensive previews.