A Memorable night with Bela Fleck and the Flecktones 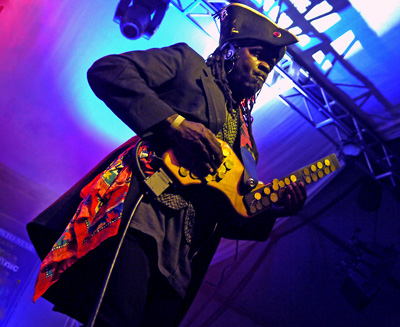 A large and predominantly young crowd gathered in and around the Mainstage to see 5 After 4 and later Béla Fleck and the Flecktones as Toronto shifted gears towards the end of the work week before a long weekend.

Béla Fleck gathered the original Flecktones for the first time in 18 years in the hope of reconnecting with what worked in the past and creating new ground. A few years ago, the group played a memorable concert to a capacity crowd when the exceptional saxophonist Jeff Coffin was touring with them. In anticipation of a sizable audience, the chairs inside the tent were removed to accommodate more people comfortably.

In this band, each musician brings his unique style and sound to his instrument that helps define whole. They are all equals even if Béla Fleck happens to be the leader. Over the years, Fleck, the master of the 5-string banjo, has drawn on a rich variety of influences and styles including bluegrass, jazz, folk, African, Indian etc. He is also extremely busy when observing his list of activities that include creating new music for various band formations, writing commissioned pieces for a symphony orchestra and collaborating with other musicians. A harmonica can be a harmonica. Yet when Howard Levy plays it in conjunction with the other instruments on a tune such as “Gravity Lane,” the result is the melodic sound that defines them. Roy Wooten, brother of bassist Victor Wooten and also known on stage as “Future Man,” brings his drumitar, a unique drum instrument that he invented and looks like a guitar. He is also the only one who adds limited vocals on just some of the Flecktones’ compositions.

Apart from the initial introductions, the Flecktones moved from one piece to the next as if it was a continuous suite with short breaks in between. They were at the beginning of a north American tour promoting the cd entitled Rocket Science (eOne Music, 2011) and threw in old signature pieces such as “Sex In A Pan.” Even though the recording was relatively new for this particular concert date, the style and feel sounded similar to the band’s previous collaborations. The flow of “Gravity Lane” sounded like a comfortable countryside train ride with all the turns and scenic changes making it particularly enjoyable. Victor Wooten threw in a reference to “Jean-Pierre” when the tempo slowed down for his solo. For a couple of tunes, Fleck brought in Casey Driessen, an American bluegrass fiddler for added country textures. One of the collaborative highlights was a series of solo duos on a hoedown tune, first between Levy and Wooten and then between Fleck and Driessen. Levy later contributed beautiful classically inspired melodic lines to “Sweet Pomegranates” thereby demonstrating his full musical talents on his chosen instruments.

The Flecktones came back on stage for the encore that fans were blurting out: “The Sinister Minister!” Wooten souped up a frantic play on bass right up front with the drumitar keeping time in the background with deep grooves. Reaching climatic levels, he literally threw the bass around his body with the strap preventing the instrument from flying in any direction.

The festival was now moving towards the final stretch of the musical train ride.