Back to the Roots! 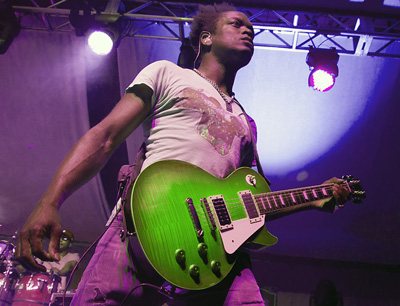 Canada Day was a delay of relaxation (relatively speaking) with a shorter list of performances on tap considering that this is a national holiday.

At lunchtime under a cloudless sky, the young Toronto group, Heavyweights Brass Band, entertained the gathering at the Outdoor Stage. With Chris Butcher on trombone, Jon Challoner on trumpet, Paul Metcalfe on saxophones, Rob Teehan on sousaphone and Lowell Whitty on drums, these guys have a sound that could easily blend in a New Orleans jazz gig. Later on there was the 8th annual Groove & Graffiti featuring a performance by Shad.

The quiet day changed in the evening when a large audience came to witness the legendary band, The Roots, and “make some noise!” The hip hop/neo soul band was formed back in ’87 by Tariq “Black Thought” Trotter and Ahmir “?uestlove” Thompson in Philadelphia. They became the house band for “Late Night with Jimmy Fallon” and have gained a huge following over the years.

On this occasion the group drew from a variety of sources with some heavy acid jazz grooves to icons such as Bob Marley and Fela Kuti. There were also pop elements thrown into the mix.

Gil Scott-Heron was an American soul and jazz poet and musician who was in his prime during the 70s and 80s. In fact he helped influence the hip hop and neo soul movement. He passed away less than 2 months ago and The Roots paid tribute to him with the classic “The Bottle,” a danceable tune with a somber message on alcoholism. The fans were buzzing in the standing room only tent as well as the surroundings. During a call and response moment the questions with the expected answers were “What do you want?– Roots! Roots! When do you want it?– Right now!” The 90 minutes went by in a flash.

Previous post A Memorable night with Bela Fleck and the Flecktones